Bangladesh Prime Minister: Hillary Made Me Break Ethic Laws For Her Foundation

Bangladeshi Prime Minister Sheikh Hasina[1] has come forward as yet another government official claiming that Clinton pressured India to keep a high-profile Clinton Foundation donor as chairman of Grameen Bank, a famous microcredit bank in the country. Muhammad Yunus has been a friend of Clinton’s since Arkansas by the way and is a large donor to the Clinton Foundation. Yunus was awarded the 2006 Noble Peace Prize, reportedly with backroom lobbying by Bill Clinton. As a New York Senator, Clinton successfully pushed Congress to award him the Congressional Gold Medal. Then-President Obama awarded him the Presidential Medal of Freedom, the nation’s highest civilian award, in 2010. Clinton aides also strong-armed this South Asian prime minister’s son with an IRS audit to halt an investigation into this guy.

Yunus was caught embezzling funds from this bank. It wasn’t just an age issue. Hillary Clinton personally phoned the prime minister and exerted the same pressure she had on her son. “Hillary Clinton phoned me and exerted the same pressure. Even the U.S. State Department summoned my son Joy three times and told him that we would face trouble,” Hasina added. She said State Department officials told Joy that Clinton would not take the matter lightly. “Convince your mother,” she recalled Joy quoting officials. Non-coincidentally, the World Bank then denied a $1.2 billion loan to Bangladesh while the IRS was pressuring Joy in 2012. 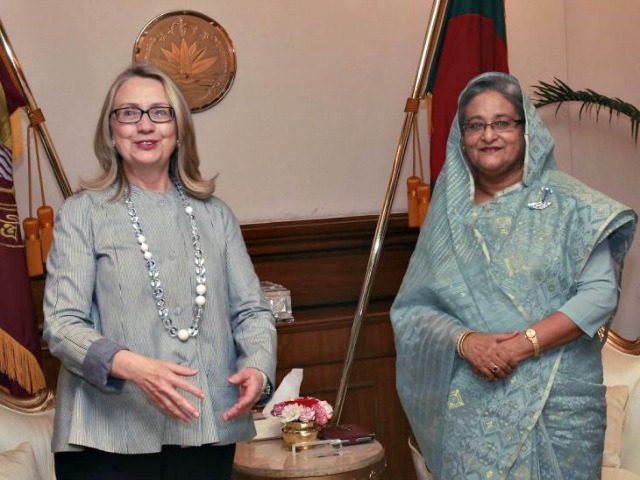 A foreign government has revealed another one of the Clinton Foundation’s pay-to-play schemes.

Bangladesh Prime Minister Sheikh Hasina said that Hillary Clinton “personally pressured” her to help a Clinton Foundation donor during Clinton’s tenure as secretary of state in 2011, despite it being against ethics laws, Circa[3] reported.

Hasina’s press secretary told Circa that Clinton placed a phone call to her office in March 2011 insisting that 2006 Nobel Peace Prize winner Dr. Muhammed Yunus get his job back as chairman of Grameen Bank, a famous microcredit bank in the country.

Yunus is chairman of the bank’s nonprofit Grameen America, which donated between $100,000 and $250,000 to the Clinton Global Initiative, Circa reported.

Clinton is guilty of massive corruption here and a pay-to-play scheme for the Clinton Global Initiative. Yunus told the Independent in 2013 that he feared his ouster would cause the bank to be under too much government control and detract from the bank’s original mission. “It will be a disaster,” Yunus said. “Everybody in Bangladesh knows that if any business is controlled by the government, it goes down. Now why do they want to do that for the bank?” No, he is afraid his stealing and corruption will be uncovered and so is Hillary Clinton.

Declassified WikiLeaks cables revealed that Yunus and Clinton had been in contact a few years before the then-secretary of state pressured the Bangladeshi prime minister. “In 2009, Dr. Yunus sent a personal email to then-Secretary of State Clinton’s office asking for intervention into the Bangladesh bank and stated his concerns,” a WikiLeaks exchange showed.

According to[4] an Associated Press report[5] from August, “at least 85 of 154 people from private interests who met or had phone conversations scheduled with Clinton while she led the State Department donated to her family charity or pledged commitments to its international programs.” Isn’t the corruption here obvious? And where was James Comey and the FBI or the DOJ during all of this? Nowhere to be found as usual. 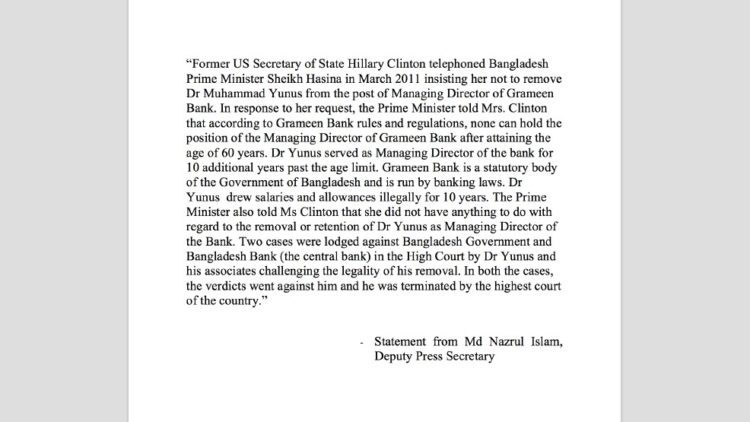