Rep. Marsha Blackburn[1] is a class act all the way. She was interviewed on CNN this Sunday by Jake Tapper. Blackburn isn’t happy over Hillary Clinton blaming Russia, WikiLeaks and James Comey for her defeat. She thinks it is disgraceful and that Clinton should take responsibility for losing, say she’s sorry and move on. Something that Hillary Clinton will never, ever do. Not in this lifetime anyway.

Clinton had the chance to rise above all this and be a roll model. Instead, she is doubling down on being bitter and divisive. She just can’t let it go and she is setting a terrible example. Hillary missed an incredible opportunity to become a leader instead of someone who is not gracious and is just vindictive over losing. In other words, she would have to become someone other than who she is. 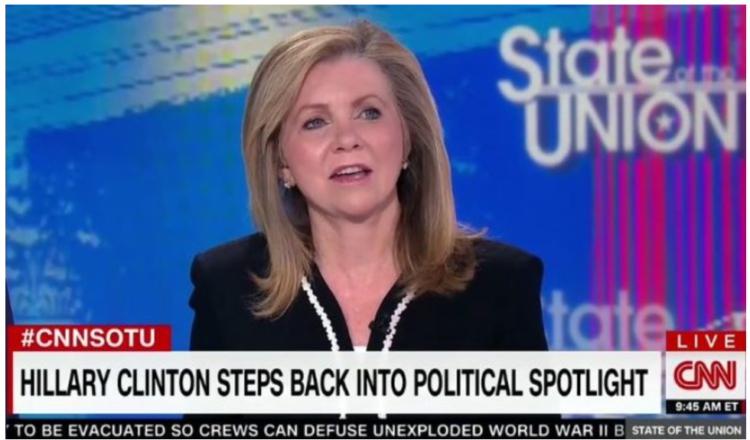 In a CNN interview Sunday, Rep. Marsha Blackburn had a fiery take on Hillary Clinton’s refusal to move on from her 2016 electoral defeat.

Host Jake Tapper asked Blackburn if it made her “happy” to see Clinton continue to blame FBI Director James Comey and Wikileaks for her loss, but Blackburn had a much classier answer in mind.

“I think as a woman who is in elective office, it is disappointing to me,” she said. “She has the opportunity to role model graciousness but she is choosing to live and stew in bitterness and to blame somebody else.”

“Throughout my career I’ve seen over and over again, eventually you say, ‘This didn’t work,’ or ‘I didn’t win,’ or ‘I’m sorry,’ and you move on,” Blackburn continued to the nods of other panelists.

“She is missing a great opportunity by not doing that.”

Hillary Clinton has no one but herself to blame for her losses. She lied, schemed and manipulated every way she could and she still lost to Donald Trump. Now, she is trying to tear him down instead of supporting the leader elected by the American people to undo the horrendous mess the Democrats left behind.

Being a woman had nothing to do with losing the election either. Sucking as a candidate and as a human being did. Hillary Clinton is the most corrupt politician to ever aspire to the presidency. She truly believes she is above the law. Laws are for the riff raff, not for an elitist like her. And we are to blame for not making her answer for her corruption and crimes. Marsha Blackburn handled it perfectly… she has far more class than Clinton will ever have.