This is a massive travesty of justice.[1] I predicted a couple of days ago that Hillary would not be charged with anything and sure enough, FBI Director James Comey just announced they are ending their investigation and turning it over to the DOD with a recommendation of “no charges.” Clinton will continue her march to the White House and all semblance of justice in this country is now dead. Top Hillary Clinton aide Huma Abedin recently told the world that Clinton burned many of her daily schedules and that she didn’t want her emails to be seen by “anybody.” She has not only violated the Espionage Act, she is guilty of treason and rather than being prosecuted for it, they are shoving her towards the presidency. This is monstrous. 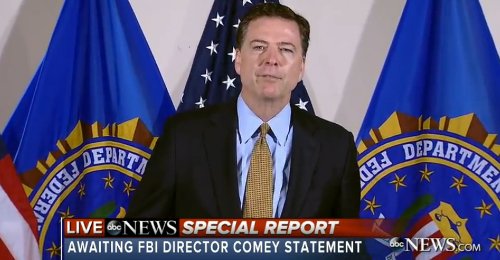 After she was interviewed by the FBI for 3.5 hours last week, Hillary Clinton is off the hook regarding her email scandal.

FBI Director James Comey just told us everything he knows about the situation, and it turns out that no charges are likely.

In fact, Comey will recommend to the DOJ that “no charges” should come about.

This outcome was a foregone conclusion and was solidified by Loretta Lynch and Bill Clinton on that plane. The only remaining hope now are charges over the Clinton Foundation and I predict those will be swept aside as well. Here is a copy of Comey’s statement.[3] Not only is Hillary getting away with a plethora of criminal actions, Trump is not being held to account for soliciting funds from foreign entities. Our laws evidently mean squat anymore. As far as I’m concerned, I’m of the same mind as John Hancock was outside of Boston during the Revolutionary War… let it all burn.