Hillary Clinton attended the 9/11 Memorial[1] for 90 minutes this morning at Ground Zero. She abruptly left the ceremony after reportedly having a fainting episode and a medical emergency. I just received the footage from Twitter (thanks to Denise Simon):

#HillaryHealth[4] When a mysterious piece of metal flies out of her pant leg, is this a broken leg brace? Someone? pic.twitter.com/Ej29QmSMUg[5]

That folks, is way more than a fainting spell. Her knees were buckling all the way to the car. She stumbled and fell off the curb and was caught by her detail. She lost her shoe in the process. I wonder if this will end her campaign. They are saying she is just overheated… that is not what I just witnessed.

This was an honest-to-God medical emergency[7] of some sort. They whisked her away to Chelsea Clinton’s apartment for some reason. I’m sure a private on-call doctor is in attendance. 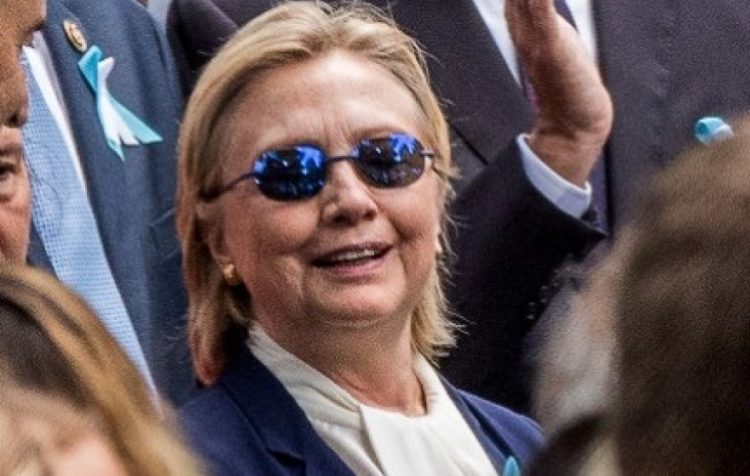 NEW YORK CITY — Democratic presidential nominee Hillary Rodham Clinton reportedly fainted on the way to her van after she abruptly left the 9/11 memorial ceremony at Ground Zero of the attack on the 15th anniversary, having to be helped into her vehicle by a protective detail.

Clinton, who was here and only about 20 feet away from Republican presidential nominee Donald J. Trump, was listening along with Trump to the reading of the names lost in the terror attacks on this tragic day 15 years ago. Trump appeared at the ceremony around 8:20 a.m. receiving applause when he arrived, while Clinton arrived shortly before the first bell rang at 8:46 a.m. which is a citywide moment of silence in observance of time the first plane struck the North Tower. Shortly before 9:37 a.m.–the time marked for a moment of silence in observance of the flight that struck the Pentagon down just outside Washington, D.C.–Clinton was seen leaving the ceremony with her press corps in tow. Clinton was leaving through a back entrance, quietly.

Several reports[9] have surfaced since Clinton abruptly left the 9/11 memorial ceremony that she had a medical emergency and fainted on the way to her car. Her U.S. Secret Service protective detail actually had to help carry her into her car, according to a Fox News report from Rick Leventhal.

Reporters were blocked[10] and kept in the dark on all of this, but you can’t stop social media. Things have a way of just getting out.

Clinton does not look well enough to make it through the election. Today is a very bad day for the Hildabeast. 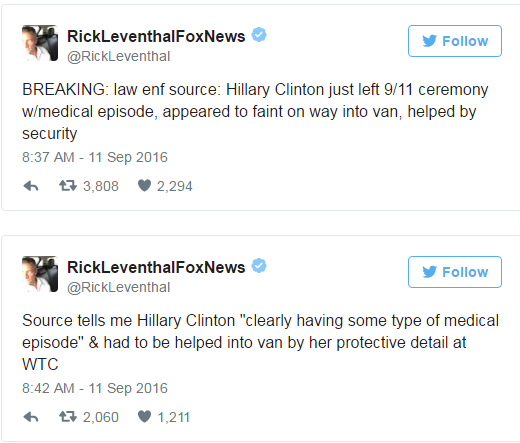 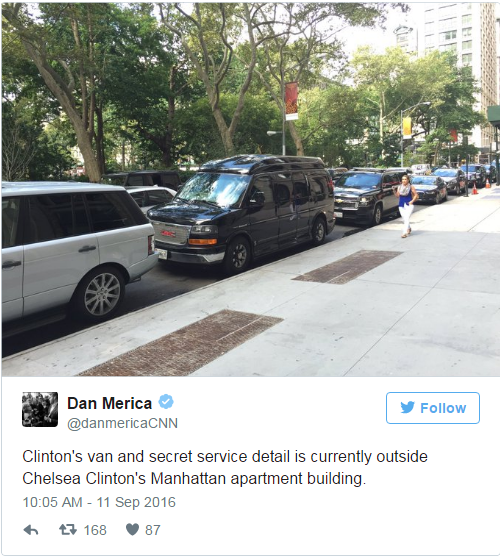 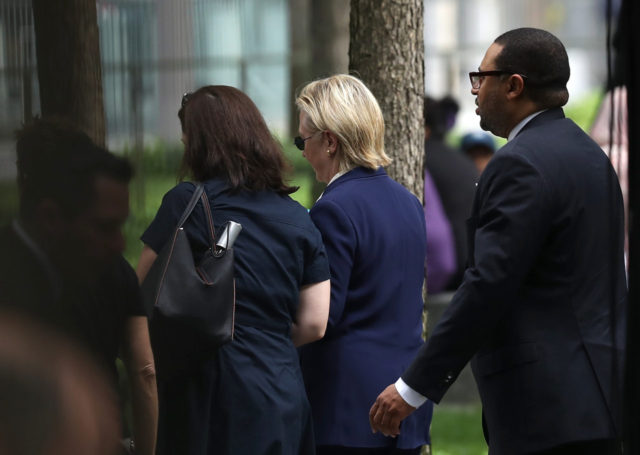