What can we expect out of a Hillary Clinton presidency? Chuck Norris digs into Hillary’s past, and what he finds, you won’t like. 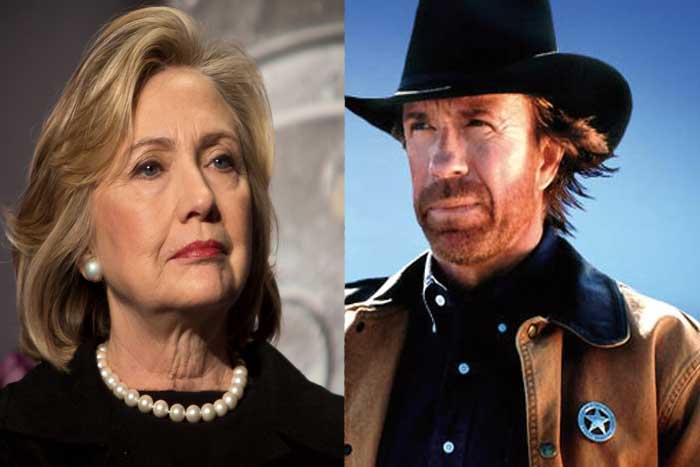 Most people think that the two most important names in the Democratic race for the White House in 2016 are Obama and Clinton. However, the two names you should be paying attention to are Cloward and Piven.

Don’t know who they are? Don’t worry, most people don’t — but conservative commentator and generally kicka** guy Chuck Norris is going to make sure they do.

In an op-ed for WND, Norris explained that the two people — Richard Cloward and Frances Fox Piven — were academics who came up with a plan to introduce permanent socialism in the United States.

Norris said that “the Cloward-Piven strategy is a political plan created in 1966 by two Columbia University sociologists to overload the U.S. public welfare system, the goal being to replace it with a national system of ‘a guaranteed annual income and thus an end to poverty.’

“I echo again that it’s neither a coincidence that Obama graduated from Columbia University nor that others who espoused the Cloward-Piven strategy were a group of radicals who have been a part of his life and education: Bill Ayers, Saul Alinsky, Bernardine Dohrn, George Wiley, Frank Marshall Davis, Wade Rathke and George Soros, among others,” Norris continued.

“What’s also not a coincidence is how close Hillary ran in the same circles.”

… “Robert Chandler, a retired Air Force colonel and former strategist for the White House … explained in the Washington Times that ‘much of (the Cloward-Piven) strategy was drawn from Saul Alinsky.’ There’s no doubt that Alinsky’s life and work served as the coach and plan for Cloward and Piven,” Norris writes.

“Hillary’s similar discipleship devotion was clearly seen by her 92-page college thesis paper on Saul Alinsky, which is a glimpse behind the present veil of her politically savvy and guarded gloss into the heart of her true ideologies … No surprise that in 1993, the Clintons asked officials at her alma mater to hide Hillary Rodham’s senior thesis from Clinton biographers.”

… “For example in Oregon, legislators have just enacted a subsidiary law that registers a person to vote when they obtain or renew a state driver’s license. That might sound all fine and dandy, too, until one realizes that a stone’s throw away in neighboring states like California, they are doling out licenses to 1.5 million illegals over the next three years. How long will it be until California’s Motor Voter laws extend voting rights to illegals, too?”

“You see, the plan to ‘fundamentally transform the United States of America’ has a successor, and she must be stopped.”

We always knew that Hillary was corrupt and would continue down Obama’s path of fundamentally damaging the country. This is why it’s so important to make sure that we nominate the right person (as in, not Trump), someone that we know can beat her and prevent the continuation of Obama’s disastrous policies.