Well maybe…[1] I have suspected from the beginning that either some of the WikiLeaks emails were fake or manipulated. I think this is one of them. The name at the top is Christina Freundlich[2]. She was the communications director for the Iowa Democratic Party… that is until February 2015. Long before the email below was supposedly sent. She’s now a DNC spokeswoman and her claim to fame was taking a selfie[3] in 2015 in front of a deadly New York City fire.

It’s possible it is still from Christina, but if it is, it sounds like she is being darkly humorous to me. Frankly, no one would answer the ad, it is so blatantly anti-Trump and sexist. So, I can’t imagine it is serious. It is being reported as such, but seriously?

WOW! THESE PEOPLE ARE JUST ROTTEN—

What kind of people approve these slimy tactics?

Their heinous plot[5] was revealed by Wikileaks. 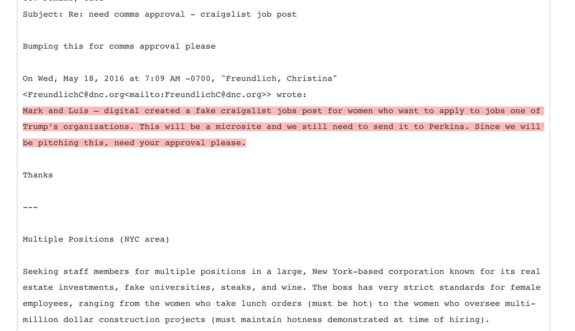 From the Podesta email:

Mark and Luis – digital created a fake craigslist jobs post for women who want to apply to jobs one of Trump’s organizations. This will be a microsite and we still need to send it to Perkins. Since we will be pitching this, need your approval please.

The top Clinton advisors, including Podesta, approved of the ads.

Gateway Pundit is claiming that Podesta and Clinton’s advisers approved of the ads. Really? I highly doubt they were serious if they did. There is enough damning crap on Hillary already floating around out there without pushing this stuff. Just sayin’.

Seeking staff members for multiple positions in a large, New York-based corporation known for its real estate investments, fake universities, steaks, and wine. The boss has very strict standards for female employees, ranging from the women who take lunch orders (must be hot) to the women who oversee multi-million dollar construction projects (must maintain hotness demonstrated at time of hiring).

Title: Honey Bunch (that’s what the boss will call you)

No gaining weight on the job (we’ll take some “before” pictures when you start to use later as evidence)
Must be open to public humiliation and open-press workouts if you do gain weight on the job
A willingness to evaluate other women’s hotness for the boss’ satisfaction is a plus
Should be proficient in lying about age if the boss thinks you’re too old Working mothers not preferred (the boss finds pumping breast milk disgusting, and worries they’re too focused on their children).
About us:

We’re proud to maintain a “fun” and “friendly work environment, where the boss is always available to meet with his employees. Like it or not, he may greet you with a kiss on the lips or grope you under the meeting table.
Interested applicants should send resume, cover letter, and headshot to [email protected]
After sending a reminder to her superiors, Freundlich’s ideas was eventually approved by DNC Communications Director Luis Miranda. His response is copied below.

“Yes it is” responded Freundlich.

This story is actually from last summer and is making the rounds. Frankly, I’m not buying it. But everyone is lapping it up. What do you think? Is this real? And who in their right mind would answer it if it was? Everyone needs to take a deep breath and eat some fruit or something. Get a grip.