Hillary Clinton just got some bad news that the rest of us are cheering. And no, it’s not having her house on fire. Although that was ironic… it started in a bedroom. No one was hurt though. The same cannot be said for what is about to happen to Hillz. The Justice Department just launched a new inquiry into whether the Clinton Foundation engaged in any pay-to-play politics or other illegal activities while Hillary Clinton served as Secretary of State. That’s according to law enforcement officials. Looks like Hillary’s nightmare is coming back to haunt her.

FBI agents in Little Rock, Arkansas are taking the lead on the investigation. That’s where the Clinton Foundation got its start. They have interviewed at least one witness so far. More to come in the next few weeks is expected. Let’s hope it’s a real investigation this time and it nails this corruptocrat. One of the few things Hillary would rock is an orange jumpsuit. I’m not holding my breath, but hope springs eternal. The probe is looking into whether the Clintons promised or performed any policy favors in return for largesse to their charitable efforts or whether donors made commitments of donations in hopes of securing government outcomes. Pay-to-play was the name of the game with the Clintons. 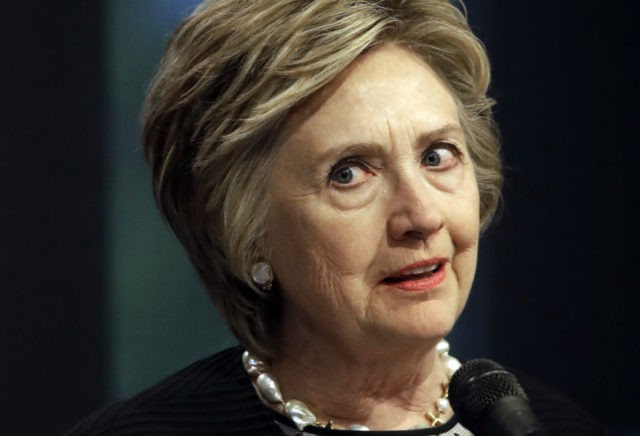 They will also be looking into whether any tax-exempt assets were converted for personal or political use and whether the Foundation complied with applicable tax laws. The one witness that was interviewed described the session as “extremely professional and unquestionably thorough” and it zeroed in on whether Clinton’s charitable efforts received any favorable treatment from the Obama administration on a policy decision previously highlighted in media reports. Interesting. Of course, the witness is anonymous, but since the probe is verified, this looks to be accurate. The FBI is not commenting on it.

Hillary Clinton’s lapdog Nick Merrill ripped the FBI a new one for re-opening the case. He called the probe “disgraceful” and suggested it was nothing more than a political distraction from President Trump’s Russia controversies. Uh no… this is all Hillary and it’s been coming for a long time. Time to panic Hillz. “Let’s call this what it is: a sham,” Merrill said. “This is a philanthropy that does life-changing work, which Republicans have tried to turn into a political football. It began with a now long-debunked project spearheaded by Steve Bannon during the presidential campaign. It continues with Jeff Sessions doing Trump’s bidding by heeding his calls to meddle with a department that is supposed to function independently.” You just keep spinning those lies Nick… they are about to bite you in the ass.

It would appear that Jeff Sessions is finally doing his job. For years, the media has reported countless stories on donations to the Clinton Foundation or speech fees that closely fell around the time of favorable decisions by Hillary Clinton’s State Department. Conservative author Peter Schweizer exposed a lot of it in Clinton Cash and that renewed the calls for reopening the investigation.

Jeff Sessions has been under pressure by a number of GOP members of Congress to appoint a special counsel to look into the corruption surrounding Clinton. Hillary’s email scandal is also on the docket for the Justice Department and they are sure to dig into that as well. James Comey will be dragged through this as he should be too. A senior law enforcement official said the Justice Department was exploring whether any issues from that probe should be re-opened, but cautioned the effort was not at the stage of a full investigation. One challenge for any Clinton-era investigation is that the statute of limitations on most federal felonies is five years and Clinton left office in early 2013. That was the whole point, wasn’t it? To run out the clock so she could walk. We’ll see what happens now. This is one of the biggest legal travesties to ever hit this nation.