James Comey was grilled today[1] in front of Congress and it did not go well for him. He looked ticked. He was aggressively questioned by Democrats on the investigation into Hillary Clinton’s email scandal and the server she used. At the heart of this is that the left is adamant that Comey’s decision to reopen the case on Clinton’s emails affected the outcome of the election. Personally, I don’t think it did. Not enough to make a difference. But Comey revealed that there were thousands of Clinton’s emails on Anthony Weiner’s laptop. Huma Abedin was sending classified emails to her husband. Tell me why these people are not in jail again?

Comey reiterated that he felt he was doing the right thing. But the right thing would have been to charge Clinton, Abedin and Weiner and that didn’t happen. You know what was ‘catastrophic’? Letting all of these people walk. Comey said he was asked by a subordinate whether his decision would help then-candidate Donald Trump with the election, but he did not “for a moment” think about whose political fortunes would be affected, and that he had to do the “right thing.” In the end, he didn’t do the right thing and I still firmly believe that James Comey should be removed as the head of the FBI. 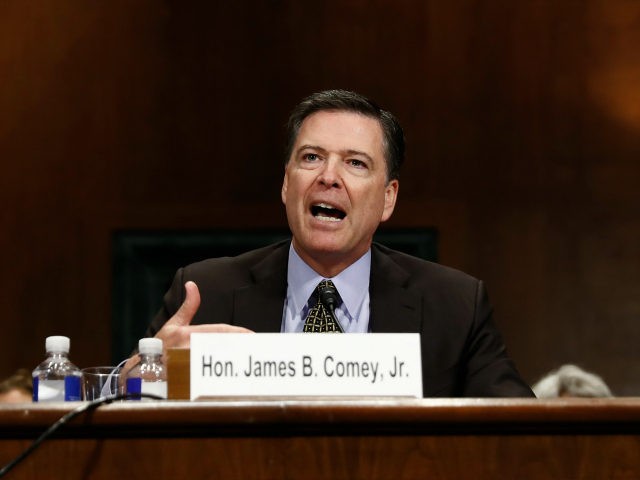 FBI Director James Comey hit back Wednesday against Democratic criticism of his decision to reopen the investigation into Hillary Clinton’s emails 11 days before the 2016 election.

He said although it made him “mildly nauseous” to think he could have had some impact on the election, he believes he did the right thing and to this day, would not change his mind.

He said the seized laptop of Anthony Weiner — the husband of top Clinton aide Huma Abedin — had metadata that “showed there were thousands” of Clinton’s emails on his laptop, including classified information and what officials believed could be missing emails from her first three months as secretary of state.

He said after repeatedly telling members of Congress that the FBI had concluded its investigation into Clinton, the only right thing to do was to let Congress know the case was reopened.

Clinton is still claiming it was Comey’s fault: “I was on the way to winning until a combination of Jim Comey’s letter on October 28 and Russian WikiLeaks raised doubts in the minds of people who were inclined to vote for me but were scared off.” No, you weren’t. You would have lost anyway and you can’t blame your corruption or the fact that no one likes you on James Comey. It doesn’t work that way.

Huma Abedin, a top aide to Hillary Clinton, forwarded thousands of emails, including classified information, to her husband, Anthony Weiner. That is a crime, but no one has been charged and at this rate, no one ever will be. Shame on our leaders for not going after these corruptocrats. “Somehow, her emails were being forwarded to Anthony Weiner, including classified information,” Comey said, adding later, “His then-spouse, Huma Abedin, appears to have had a regular practice of forwarding emails to him for him to print out for her, so she could deliver them to the secretary of state.”

Comey was asked if Weiner read the classified information and he said ‘he didn’t think so’. Pray tell, how would he know that? And it doesn’t absolve everyone of breaking the law here either. He says both Abedin and Weiner “potentially” committed crimes. He says Abedin, in particular, was not prosecuted as he could not “prove criminal intent.” “We didn’t have any indication that she had a sense of what she was doing was in violation of the law,” Comey said. Oh, bull poop.