Since the Hillary/Weiner email revelation, the liberal media establishment has been on its former hero James Comey like a school of piranhas. A strikingly unreasonable WaPo editorial shrieks that Comey knuckled under to Republican “bullies” despite Hillary’s obvious innocence of wrongdoing. According to Ed Klein, it’s true that Comey responded to pressure to stop shielding Shrillary; however, the pressure came not from congressional Republicans but from FBI agents who still believe in the rule of law, from his wife, and presumably from his own conscience:

Comey’s decision to revive the investigation of Hillary Clinton’s email server and her handling of classified material came after he could no longer resist mounting pressure by mutinous agents in the FBI, including some of his top deputies, according to a source close to the embattled FBI director.

Principled employees have been resigning in disgust at Comey’s willingness to submit to politicization of the agency.

‘He’s been ignoring the resignation letters in the hope that he could find a way of remedying the situation,’ said the source.

‘When new emails that appeared to be related to Hillary’s personal email server turned up in a computer used [by her close aide] Huma Abedin and [Abedin’s disgraced husband,] Anthony Weiner, Comey jumped at the excuse to reopen the investigation.

‘The people he trusts the most have been the angriest at him,’ the source continued. ‘And that includes his wife, Pat. She kept urging him to admit that he had been wrong when he refused to press charges against the former secretary of state.

‘He talks about the damage that he’s done to himself and the institution [of the FBI], and how he’s been shunned by the men and women who he admires and work for him. It’s taken a tremendous toll on him.’

It’s never too late for redemption for those who earnestly repent. But for Comey, it is far too late to redeem himself painlessly. It isn’t only the liberal media after his hide; his boss and his boss’s boss, Loretta Lynch and Obama, are reportedly enraged at his insubordination.

If only he had done the right thing from the beginning by recommending indictment, he might have spared himself and his agency a great deal of grief. 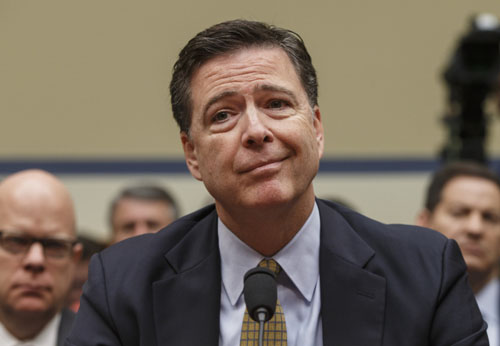 Do the right thing the first time. It’s hard, but it hurts less.