She can’t be serious.[1] Hillary Clinton’s book is already making the leftist media rounds. She evidently has one particular section where she talks about sharing a stage with Donald Trump during the debates. She says she felt like saying, “Back up you creep. Get away from me. I know you love to intimidate women, but you can’t intimidate me. So back up.” This was after the groping video came out against Trump. First off, she has absolutely nothing to fear about any man wanting to grope her, if you get my drift. Second, she said that with a straight face having the hound dog hubby she’s married to and being the sleazy corruptocrat she is.

And it figures scummy MSNBC got an exclusive on this. Joe Scarborough and company were salivating over it like it’s even worth the crappy paper it’s printed on. You know what makes my skin crawl? Bill and Hillary Clinton. In the ‘creep’ department, they win hands down. Hillary of course plays the victimized woman here and plays up how tough she is. Just sickening. She said he was making faces at her, following her around and breathing down her neck. He actually looked stoic to me and pretty much disgusted by Clinton. I think the Hildabeast is obsessed with Trump. Maybe it’s time for a restraining order. 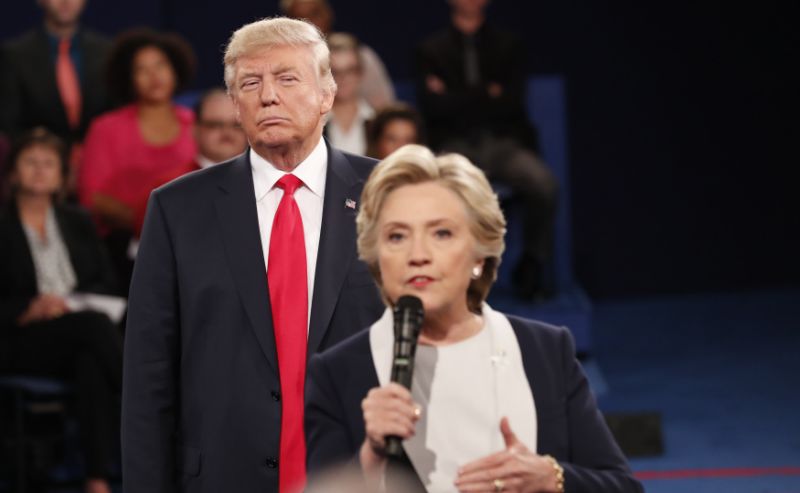 In one excerpt, Clinton writes of Trump standing behind her during the October 9, 2016 debate, “‘This is not okay,’ I thought. It was the second presidential debate, and Donald Trump was looming behind me. Two days before, the world heard him brag about groping women. Now we were on a small stage, and no matter where I walked, he followed me closely, staring at me, making faces. It was incredibly uncomfortable. He was literally breathing down my neck. My skin crawled. It was one of those moments where you wish you could hit pause and ask everyone watching, ‘Well, what would you do?’ Do you stay calm, keep smiling, and carry on as if he weren’t repeatedly invading your space? Or do you turn, look him in the eye, and say loudly and clearly, ‘Back up you creep. Get away from me. I know you love to intimidate women, but you can’t intimidate me. So back up.’ I chose option A. I kept my cool, aided by a lifetime of dealing with difficult men trying to throw me off. I did, however, grip the microphone extra hard. I wonder, though, whether I should have chosen option B. It certainly would have been better TV. Maybe I have overlearned the lesson of staying calm, biting my tongue, digging my fingernails into a clenched fist, smiling all the while, determined to present a composed face to the world.”

Hillary has never come to terms with the shellacking that Trump gave her in the election. First, she blamed everyone else for her incompetence and the fact that no one likes her. Now, she’s trying to play off past highlights and SNL skits. Lady, get over it already and freaking move on. You are boring us to death. Clinton insists on telling her story… and it is pure revisionist fantasy on her part: “Writing this wasn’t easy. Every day that I was a candidate for president, I knew that millions of people were counting on me, and I couldn’t bare the idea of letting them down, but I did. I couldn’t get the job done, and I’ll have to live with that for the rest of my life.” Banging my head on the wall yet again this morning and reaching for the Excedrin.

This is a really, really, REALLY desperate bid to stay relevant when everyone just wishes the Hildabeast would go away and stay gone. Please… we are begging you… just shut the hell up and go away! The leftist media is treating this like it is some kind of message from a saint. I can’t take it anymore. Hillary Clinton is one of the creepiest people I have ever seen. Next to her, Trump looks… well, presidential.