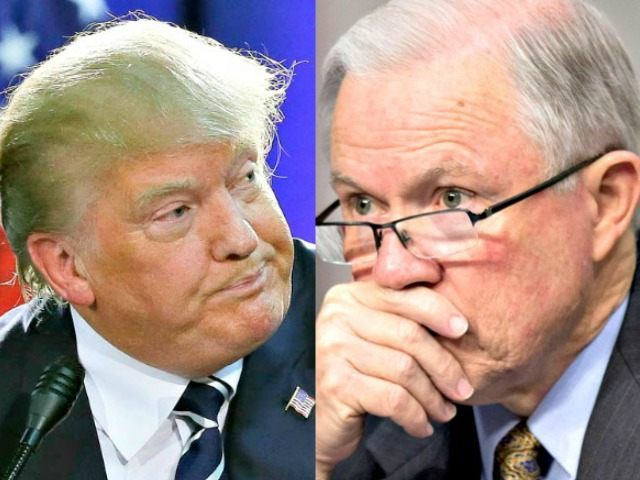 President Trump spent last night and this morning calling out the swamp.

Also in his crosshairs were the Democratic National Committee, the Justice Department, the FBI, the “Russian Dossier” folks and the rest of the Clinton Crime Family.

Speaking to reporters before leaving for a trip to Asia this morning, he said that:

“A lot of people are disappointed in the Justice Department, including me.”

If we look back to his tweets last night, we can see where he’s coming from. Looks like we’re not the only ones who get riled up by Tucker Carlson:

The @TuckerCarlson[2] opening statement about our once cherished and great FBI was so sad to watch. James Comey's leadership was a disaster!

….This is real collusion and dishonesty. Major violation of Campaign Finance Laws and Money Laundering – where is our Justice Department?

And this morning, he tweeted the following:

Everybody is asking why the Justice Department (and FBI) isn’t looking into all of the dishonesty going on with Crooked Hillary & the Dems.. …New Donna B book says she paid for and stole the Dem Primary. What about the deleted E-mails, Uranium, Podesta, the Server, plus, plus……. People are angry. At some point the Justice Department, and the FBI, must do what is right and proper. The American public deserves it!

Then, he goes on to recommend the new book by Donna Brazile, which describes how the Democratic primary was stolen by Hillary Clinton from “Crazy” Bernie Sanders.

The real story on Collusion is in Donna B's new book. Crooked Hillary bought the DNC & then stole the Democratic Primary from Crazy Bernie!

Yesterday, we covered the revelations of Donna Brazile over several articles, including this one with a video interview of Brazile[6] discussing the proof she had that Hillary rigged the whole thing.

Last week we wrote about Hillary Clinton’s knowledge of the “Russian Dossier.” She recently claimed that she had no idea that Perkins Coie was working on the terribly-sourced research into Trump’s alleged connections to Russia and Putin, but we found eight different times that she tweeted about it before the election. Starting in August of 2016, asking open-ended questions like “Seriously, what is going on with Trump and Russia[7]?” and “We have some questions about @realDonaldTrump’s cozy relationship with Russia.” Of course, it turns out that it was really the Clintons who had a cozy relationship with Russia, with Bill getting half a million dollars to speak in Moscow right after the deal for Uranium One was approved by Barack Obama. Only recently has the federal agent who was tasked with spying on Russian interference been released from his NDA that prevented him from giving details to the press. He alleges that before the deal was finalized, he was prevented from reporting on the case to Congress, which he says would have caused them to halt the sale due to the shady circumstances.