Wow… what a duplicitous witch[1] Hillary Clinton is. WikiLeaks released another document/email dump and in this one were all kinds of evil little tidbits. In it they talk about saying one thing in public and another in private. Hillary has always been in bed with Wall Street, corrupt corporations, dirty politicians, our enemies and anyone — I mean ANYONE — who will give her money period. If you look up the definition of a political whore, Clinton’s mugshot will be right next to it.

These emails also cover the fact that she realizes how the public perceives her and that her image sucks. They stress how her paid speeches have to be covered up. She’s prepping one persona for donors and one for voters – both opposed to each other. That takes ‘hypocritical’ to new heights even for the Hildabeast. She knew her speeches were problematic, so the spin and cover-up went into high gear. 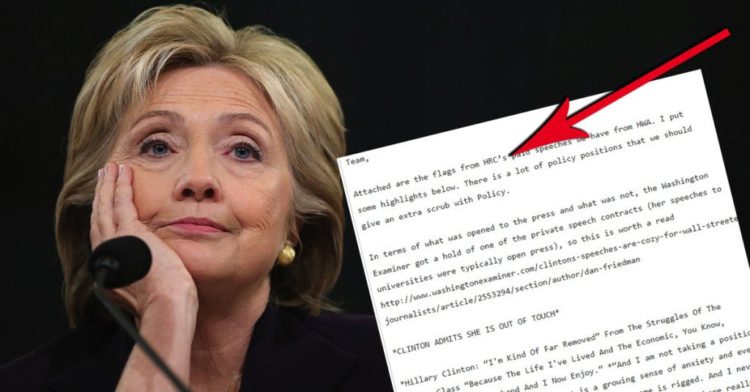 There’s much to go through. It really is worth reading the entire leak. Here’s one of my favorite parts from Madam Pantsuit:

“But If Everybody’s Watching, You Know, All Of The Back Room Discussions And The Deals, You Know, Then People Get A Little Nervous, To Say The Least. So, You Need Both A Public And A Private Position.”*

In other words, let me say one thing in public, and one other thing behind closed doors. More on that little nugget in my commentary paragraph below this next gem:

“Even If It May Not Be 100 Percent True, If The Perception Is That Somehow The Game Is Rigged, That Should Be A Problem For All Of Us.”

“Part of the problem with the political situation, too, is that there is such a bias against people who have led successful and/or complicated lives…”

Can’t imagine what ideology Hillary is talking about when she said this (see This CEO ‘Apologizes’ to Bernie Sanders…and it’s Awesome![3]). Allow me to translate: Hillary and the Democrats love Wall Street. Democrats only say they hate Wall Street because it’s politically expedient. Because their basement-dwelling followers (Hillary’s words)[4], think big banks, Wall Street, corporations, anything that actually makes money and employees people, are all from the devil. So Hillary goes along with the meme in public, but in private she blows vaped smoke up Wall Street’s rear-end. Clear?

“My dream is a hemispheric common market, with open trade and open borders, some time in the future with energy that is as green and sustainable as we can get it, powering growth and opportunity for every person in the hemisphere.”

So we’re in a learning period as we move forward with the implementation of the Affordable Care Act. And I’m hoping that whatever the shortfalls or the glitches have been, which in a big piece of legislation you’re going to have, those will be remedied and we can really take a hard look at what’s succeeding, fix what isn’t, and keep moving forward to get to affordable universal healthcare coverage like you have here in Canada.

She’s going to double and triple down on Obamacare. If you think it’s broken now, wait until Clinton gets her hooks in it. She’ll definitely go to Single Payer Healthcare. It’s a sure bet.

None of this is new, but it is all in writing in her emails. There’s no denying that this is exactly what Clinton intends. As I’ve said before, the woman is a bullet to America’s brain and her constitutional heart.

The batch of emails provided a glimpse into the inner workings of the Hillary Clinton campaign. | Getty