On “Fox News Sunday,” House Oversight Committee chairman Rep. Trey Gowdy (R-SC) discussed the opposition research conducted on President Donald Trump in the fabricated Russian dossier. He also specifically brought Hillary Clinton and money laundering into the mix. Gowdy wants to know if Clinton’s campaign attempted to “launder all of this through a law firm” to avoid transparency laws. That’s a very good question counselor. Because that sure looks like what Clinton did and she should be nailed for it.

Gowdy stated, “I’m not an election law expert, but the good news is you don’t have to be too understated the absurdity believing you can just launder all of your campaign money by just hiring a law firm. Imagine if you and I were running for Congress, and we just hired a law firm and said ‘Hey, you go to all the opposition, you go buy all the television, you go buy all the bumper stickers, you go higher all the experts, and we will launder all of this through a law firm. I can’t think of anything that defeats the purpose of transparency laws more than that.” 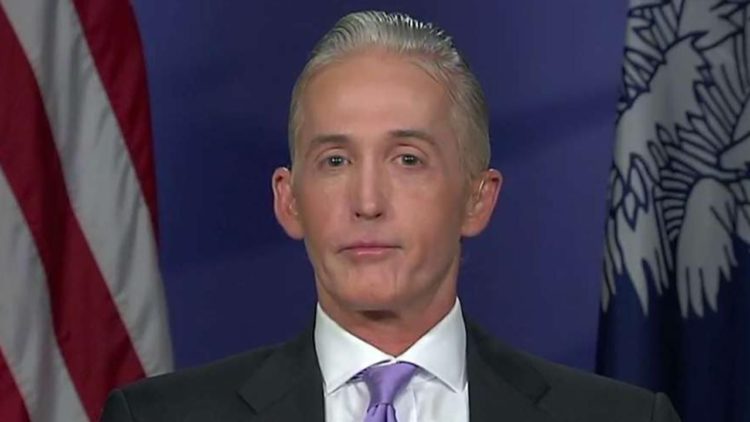 This is the exact opposite of transparency. Hillary Clinton laundered money because she felt she was above the law and no one would ever hold her accountable for it. Gowdy continued, “I am interested in that, and I am also interested in sharing some memory tricks with folks at the DNC because no one can remember who paid 10 million dollars to a law firm to do oppo research. I find that stunning. $10 million and no one can remember who authorized it, who approved it. So you’ve got two issues, a memory issue and then the lack of transparency by laundering money through a law firm.”

We all know damn well that Hillary Clinton, John Podesta and Debbie Wasserman-Schultz all knew where that money was going. They had to because they would have had to approve the funds. So, to deny knowing anything about it to Congress is blatant perjury. I would imagine that eventually we will find out exactly who knew what and perhaps they will all get to do a perp walk. What? I can dream too, can’t I?

The whole Fusion GPS deal was part of a plan to set Trump up to fall even before he was elected. Paul Manafort was a plant by the Russians and the Podesta Group to help with that end scenario. This morning, Manafort and his sidekick Gates were charged with 12 counts of working against the US and money laundering. The indictment alleges that the men set up a series of offshore companies in order to avoid taxes on their overseas lobbying work and defrauded banks in order to win loans. Mueller will try and get Manafort to magically roll on Trump. It feels like a setup to me, but we’ll see. I have no love lost for Manafort, but this whole Clinton/Obama Fusion GPS thing with the dossier etc. stinks to high heaven. Gowdy’s right… we need answers and fast.