Hillary Brags That Critics Are Afraid of Her… Gets BRUTAL Response! [VIDEO]

Just wow…[1] what a freaking delusional moonbat Hillary Clinton is. Now, she claims that her detractors actually fear her. Honey, the Clinton Machine ain’t what it used to be and no one fears you anymore. The kind ones pity you, everyone else just detests you. Man, she’s a legend in her own mind and nowhere else. Clinton just doesn’t stop. At her last commencement speech, she had another of her infamous coughing episodes. Yesterday, she donned anti-seizure glasses. So, no one cares that you aren’t dead… they realize that you are on that trail anyway. Get over yourself already.

Clinton’s political opponents and the rest of America pretty much just wish she would slither away and never darken our doorsteps again. Please. What she represents is an evil, vile mix of globalism, Marxism and corruption. No one wants what she’s selling anymore. She should go back to her woods and hang out there. At least the squirrels would then have to deal with this nut instead of the rest of us. Hillary is giving these interviews to these liberal rags in a desperate attempt to become somehow relevant in the public eye again. Fail. 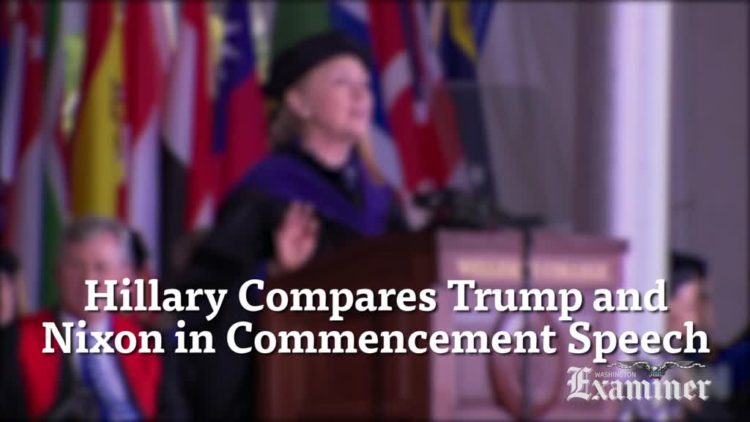 Reflecting on criticism stemming back decades and reaching into 2017 months after her latest campaign, Clinton said in a New York magazine profile[4] that it is fear that continues to drive her detractors.

“You know, these guys on the other side are not just interested in my losing, they want to keep coming after me,” Clinton said. “I mean, think about that for a minute. What are they so afraid of? Me, to some extent. Because I don’t die, despite their best efforts. But what [really drives them] is what I represent.”

Clinton did concede, however, that Trump’s “brilliant” move in the 2016 campaign was to “blow the top off.”

“You can say whatever you want about anybody else, and I’ll tell you who to be against. I’ll tell you who you should be resentful of,” she said. Her campaign’s stories “were boring in comparison to the energy behind malicious nostalgia,” Clinton added.

Clinton just formed a new political organization called “Onward Together.” So, she’s far from done with politics unfortunately. She just won’t go away. She’s worse than a rash that won’t heal. If she thinks she’s running in 2020, dream on. She’s way too old and her health is too iffy for that endeavor. Thank God for that.

What she has done is made herself a laughing stock on Twitter. That’s always amusing and shows just how truly pathetic the Hildabeast has become. She should just keep on attacking President Trump and comparing him to Nixon. Every time she does that, she reminds us why Trump was elected and we all take a moment to say a prayer of thanks. There’s nothing like a country dodging a political bullet to the brain to give you perspective.

Does Clinton want to spend her public life being humiliated or what?