You’ve got to be kidding…[1] Hillary Clinton’s campaign bus was caught in Georgia yesterday dumping human waste into a storm drain. Gross, disgusting and a major health hazard. And it was totally unnecessary. Here’s a map where RV’s can dump their waste in Georgia[2]… it’s called ‘Google’ guys. What laziness.[3] It took me all of five seconds to pull up that map. So much for caring about the environment or Georgia in general. And just think, they’ve probably been doing this everywhere they go.

Hillary wasn’t there at the time… so plausible deniability again. Now the police and the EPA are involved. People filed multiple reports of the bus dumping waste and one guy took photos of it. They actually had to call in a HAZMAT team to clean up the mess. It happened between campaign stops for the Hildabeast. 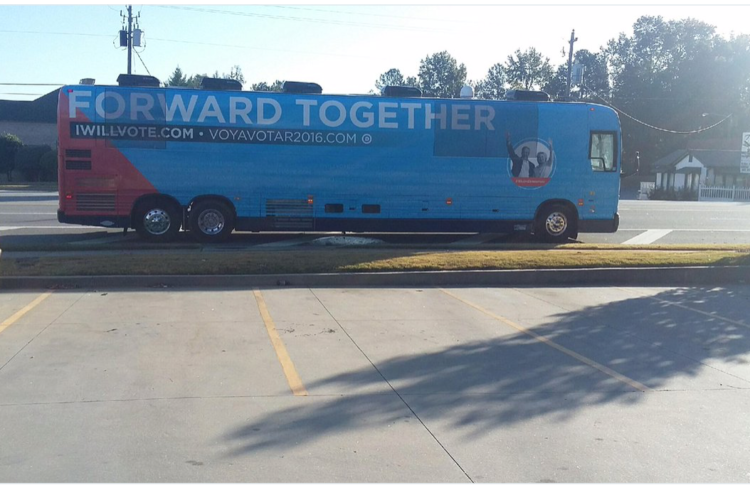 A local businessman took photos of the illegal activity, prompting police to launch a full investigation. The photos showed off-colored liquid oozing out of the bus. The bus was stationed at Grayson highway. Hillary Clinton was not at the scene as the bus was in-between campaign stops. 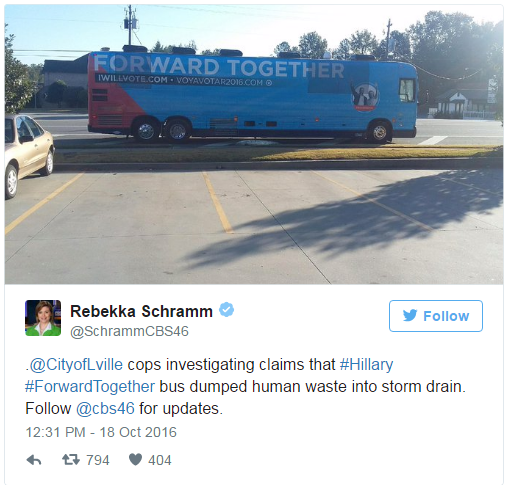 When police arrived at the scene, they were greeted with a foul odor and remnants of used toilet paper scattered across the ground. What the campaign dumped at the scene was so disgusting that a HAZMAT team was called to come in to clean up the mess.

In addition to the local police, the Gwinnett County Stormwater Management and the State Environment Protection Department are participating in the investigation.

Investigators with the Georgia Environmental Protection Agency[6] have concerns that the waste has now reached several bodies of water and are investigating the situation.

Mediaite reported[7] that the DNC has issued an apology, calling the dumping an “honest mistake” and that they would be assisting in the investigation and a clean-up:

“This was an honest mistake and we apologize to the Lawrenceville community for any harm we may have caused. We were unaware of any possible violations and have already taken corrective action with the charter bus company to prevent this from happening again. Furthermore, the DNC will work with the Georgia Department of Natural Resources, as well as local and state officials to determine the best course of corrective action.”

Oh, you mean an accident like deleting 30,000 emails? I see… these things just happen. Not. You weren’t aware dumping sewage down an open storm drain was illegal in Georgia. Really? Because everyone does it right? As usual, Democrats crap on America.