Hillary Clinton Considers Dressing Like The President For Halloween [VIDEO]

So, Hillary Clinton is considering dressing up as President Trump for Halloween. You mean she’s going to pretend that she still actually won the election? Good grief. She sure has the cackling down in the video below. Does she even get what a joke she is? Evidently not. At an event in Chicago promoting her aptly titled book What Happened, Clinton was asked what costume she would wear for All Hallows Eve. “I have to start thinking about it,” she said. “I think I will maybe come as the president!” I say go for it! It’s the only time she’ll ever actually look like a president.

When she was queried on her defeat by The Donald, she candidly stated that “there were times when I was tempted to just pull the covers over my head.” I’ll bet. And she’s delusional or just corrupt. Probably the latter. Even though there is a ton of evidence out there that she paid to have that phony Russian dossier cooked up with the help of the Russians, she still had the nerve to say that the U.S. was now in “a new kind of Cold War” with Russia. Uh, no… we never left the old one. She might have missed that since she was selling us out over Uranium One and Skolkovo. 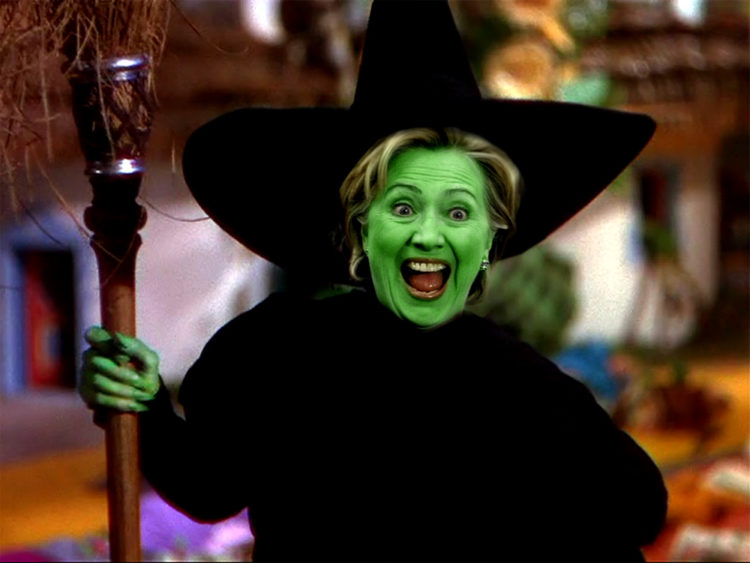 “The Russians are still playing on anything they can to turn Americans against one another,” she said, adding that sites such as Facebook and Google need to be “part of the solution and not part of the problem.” First off, Russia has always done that. They’ve been at it since the beginning. Second, censoring social media won’t stop Russia, it will just silence political critics of hacks such as the Hildabeast.

On the costume bit, Clinton was not clear whether she would go as Trump, who is the actual President, or herself as what she sees as the ‘entitled’ president. Either way, Hillary Clinton out on Halloween is a truly frightening thought. She’s personally given me nightmares for years… hell, decades. It’s not bad enough that we had to suffer through her fake laughter, fake personality and fake sincerity throughout the election. This cloven-hooved harpy just wont’ freaking go away. Take a hint already… Americans hate you Hillary. HATE YOU.

Here are some better ideas for her costume. The witch one above is classic Hillary. But an orange jumpsuit… now, she would really rock that.

Clinton explained she recovered from her defeat by reading mystery novels and watching shows on HGTV because “those have satisfying ends.” You know what would be a ‘satisfying end’ in regards to Hillary Clinton? A perp walk and then prison.

Hillary Clinton Jokes She Might Dress Up As President For Halloween & It'll Make You Nostalgic – Bustle https://t.co/BcExGTLAxK[2]

Hillary Clinton: I'm thinking of dressing up as the president 4 Halloween https://t.co/ZDEqkmRttO[5] She should dress up in an orange jumpsuit

Hillary Clinton Jokes about Dressing as 'the President' for Halloween HRC should dress as a Witch, which she is. https://t.co/ZKiM7CadsR[7]

@HillaryClinton[9] is going to dress up as President for Halloween. Now THAT would scare the bejesus out of me. I’ll have nightmares for weeks.