Hillary Clinton is just a hypocrite, so much so that it gets embarrassing even for us to watch at times. This will be one of those moments. Seriously, where does she she get off talking about presidents that have been ‘impeached’? Does she not realize who she is and who she is married to? 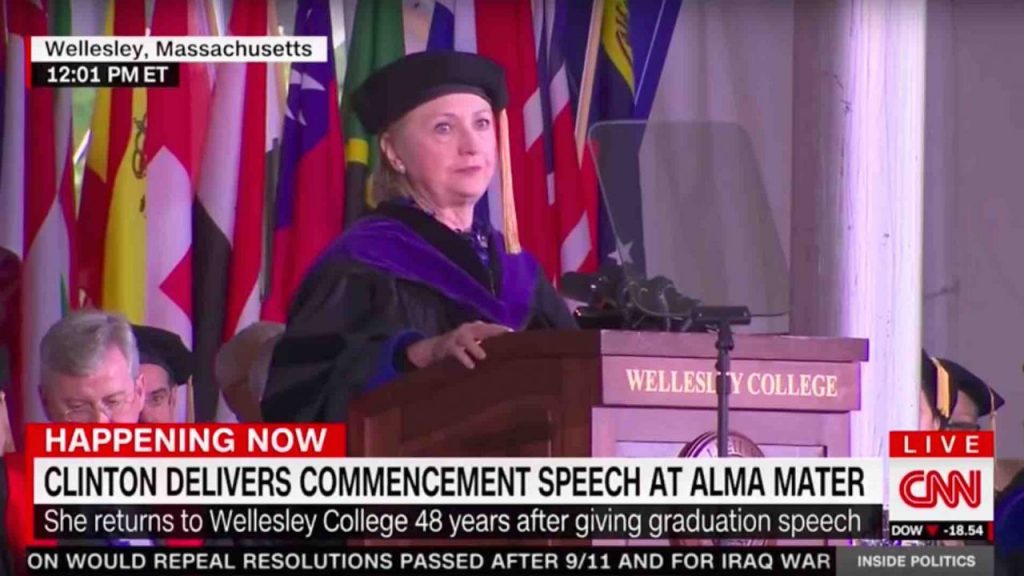 She spoke at her Alma Mater and during that speech, Clinton recalled when she had spoke there for her own graduation in the early 1970’s. She used the opportunity to explain what the times were like back then. Calling them ‘tumultuous’ political, social and a very cultural landscape.

Now, listen to what she said…try you darndest not to laugh yourself into hysteria[2].

“We didn’t trust government, authority figures, or really anyone over 30, in large part thanks to years of heavy casualties and dishonest official statements about Vietnam and deep differences over civil rights and poverty here at home. We were asking urgent questions about whether women, people of color, religious minorities, immigrants would ever be treated with dignity and respect,” Clinton said.

After this the woman went on to compare Richard Nixon, who was her president at the time, to our president now, Donald Trump.

It was a very cringe-worthy moment.

“And by the way, we were furious about the past presidential election of a man whose presidency would eventually end in disgrace with his impeachment for obstruction of justice after firing the person running the investigation into him at the Department of Justice,” Clinton said to thunderous applause and cheers from the audience.

There was one detail that Clinton got embarrassingly wrong in her account of American history, though.

Nixon was never impeached. He resigned under the threat of impeachment for obstructing justice in the now-infamous Watergate scandal.

Clinton herself worked on the Watergate committee when she was a staffer on the House Judiciary Committee.

Some have compared Nixon attempting to fire Cox to Trump firing former FBI Director James Comey, who led the agency that was investigating Russia’s meddling in the 2016 U.S. elections and alleged Trump campaign collusion with the Russian government.

What Hillary surprisingly continues to overlook is this…there are only two U.S. presidents in the history of this country that have been impeached, and of those two, lies her husband, former President Bill Clinton. The creep was impeached by the House of Representatives in 1998 for charges of perjury and obstruction of justice. These are no small charges…but the Senate voted not to remove Clinton from office. However…he was impeached nonetheless.

Other than her very own husband, Andrew Johnson was the first president to ever be impeached in 1868.

How embarrassing is it to be a two-time losing presidential candidate who gets her history wrong and happens to be the wife of one of the two presidents that have been impeached?

Why did they ask her to speak again?