Wow. Hillary Clinton has no shame whatsoever. She’s now defending her campaign for paying for that fake “Pee-Pee Dossier” against President Trump. The Steele Dossier was full of fabricated interludes between Trump and hookers in Russia. Clinton knows this… hell, she paid for it. The Clinton campaign and Democratic National Committee paid just over $1 million for the infamous Trump dossier, the opposition research firm behind the salacious document said on Wednesday. Obama paid close to $1 million as well. The DNC paid somewhere $5 and $8 million. By the way, the payments were legal, but hiding them was not.

Clinton told Trevor Noah of The Daily Show that ‘of course’ there is a difference between paying for that information and colluding with Russia to influence the 2016 election. Is there? When she was accusing Trump of that, there was no difference evidently. But now that the shoe is on the other hoof, she’s justifying her corrupt actions for all they are worth. Clinton said the dossier was simply ‘opposition research’ and pointed to the fact that it was not public knowledge during the election. You see Hills… it goes past opposition research when you start crawling in bed with a foreign enemy of the US. 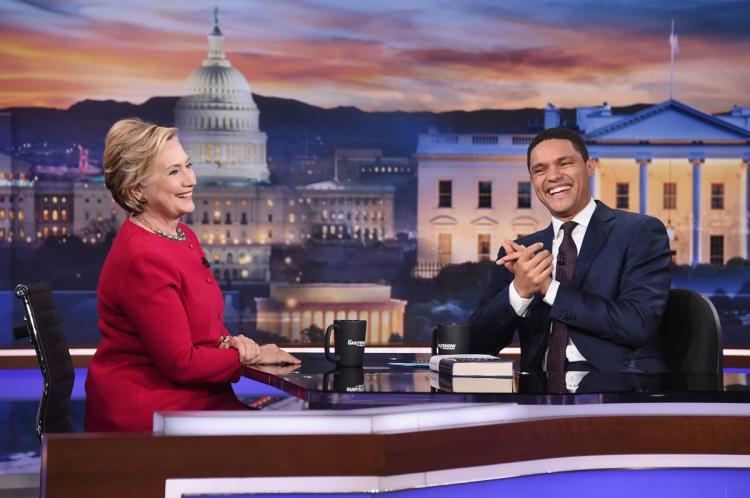 Clinton was adamant that the public should have been made aware that the FBI started investigating Trump’s ties to Russia in the summer of 2016. Well, of course she says that because she thinks it would have won her the election. It wouldn’t have. Americans see this for the setup it is. It just exposes the corruption of Clinton and those she is using even more. Clinton has previously blamed her election loss on the fact that James Comey reopened the FBI investigation into her emails and made that fact public. That and every other person/event she can think of… except of course for herself.

In her book What Happened, Clinton accused the former FBI director of ‘shivving’ her over the emails and causing a drop in the polls. Please. No one… not even communists… like the Hildabeast. Comey’s actions didn’t make a difference one way or the other. We already knew how corrupt Clinton was.

Clinton had this to say over the dossier:

“It was research that started by a Republican donor during the primary, and then when Trump got the nomination for the Republican Party, the people doing it came to my campaign lawyer [Marc Elias] and said, “would you like us to continue it?” He said yes. He’s an experienced lawyer, he knows what the law is, he knows what opposition research is. From my perspective, it didn’t come out before the election, as we all know, and what also didn’t come out, which I think is an even bigger problem… is that the American people didn’t even know that the FBI was investigating the Trump campaign because of connections with Russia starting in the summer of 2016. I know that voters should have had that information. That’s something that may have influenced some people. And it’s part of what happens in a campaign, where you get information that may or may not be useful and you try to make sure anything you put out into the public arena is accurate. So this thing didn’t come out until after the election, and it’s still being evaluated, but the fact of the FBI investigation into the Trump campaign and Russia should have come out.”

Tell us Hills, should your dealings with Russia also have come out? You were the one actually in bed with the Russkies. Careful what you wish for, you just might get it.

Clinton is facing an investigation by the Federal Elections Commission over the dossier, after the Campaign Legal Center alleged she funneled money meant for ‘legal services’ into opposition research instead. Which both Clinton and Obama did. Clinton’s presidential campaign and the DNC is accused of using legal firm Perkins Coie as a pass-through to Fusion GPS, the firm which hired ex-British spy Christopher Steele to compile the dossier. The deal with Clinton and the DNC allegedly began in the spring of 2016, when Elias was approached by Fusion GPS, and lasted until right before Election Day.

Trump is right when he portrays himself as the victim in all this. It was a political hit, plain and simple. I’d also like to know the full extent of John McCain’s involvement in all this as well as Debbie Wasserman Schultz and others on the Dem’s side. The real scandals here are a fake dossier used as a political weapon against the President of the United States and the Uranium One betrayal.