Uber lame.[1] Hillary Clinton once again mistakenly thinks she has a sense of humor. Samantha Bee was already in trouble this week for mocking a young man at CPAC for having a ‘Nazi’ hair cut. Except what he has is stage 4 brain cancer. Way to go. “Full Frontal with Samantha Bee” might consider renaming her show to “Full Frontal Lobotomy with Samantha Bee.” Just sayin’. Then she tweeted out a pic she thought was funny of President Trump and a number of men standing around him in the Oval Office: “The Trump WH is so feminist, EVERY day is Day Without a Woman.” Which Clinton retweeted. Fail.

Mysteriously, after the Hildabeast retweeted Bee’s non-humorous humor, she quickly deleted it. Perhaps she didn’t want to stand too close to Samantha Bee after all the fallout, who knows? The truth of the matter is that Trump has a number of women in his Cabinet and in fact honored A Day Without a Woman at the White House. Personally, I ignored the day. I had work to do. But nonetheless, President Trump has been very supportive of women, even liberal ones. 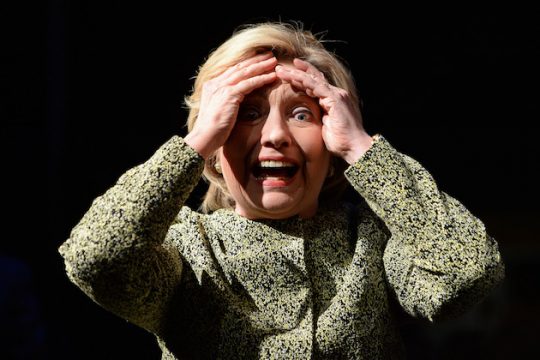 Former Democratic 2016 presidential nominee Hillary Clinton retweeted and then deleted a photo posted by the “Full Frontal with Samantha Bee” Twitter account that was making fun of the lack of women in President Donald Trump’s White House administration on Wednesday.

The “Full Frontal with Samantha Bee” Twitter account tweeted[4] a picture of Trump in the Oval Office with health insurance CEO’s from late February, the Washington Examiner reported[5].

The original Tweet from “Full Frontal” said, “The Trump WH is so feminist, EVERY day is Day Without a Woman.”

“Full Frontal with Samantha Bee” is a political comedy show on TBS.

In fact, Ivanka Trump has been championing women and equal pay, as well as support for daycare. So, what gives? I guess Samantha Bee went out and dug for a picture that only had men in it in the White House so she could push a feminist point. No one is buying that crap. The pic was one of health insurance CEO’s from late February and it was totally appropriate for that meeting. Nothing funny about it except in the warped recesses of a liberal mind like Samantha Bee’s.

I didn’t see Bee showing a pic of Trump with women. Here let me help: 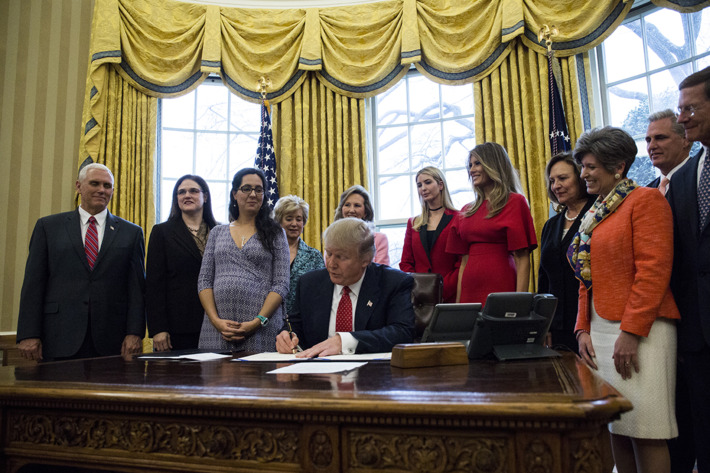 Melania is also taking on women’s causes. So, while Samantha Bee is digging up selective pics and tweeting them, and Hillary Clinton is trying to find out what real humor is, the Trump women are actually fighting for the rights of women and so is President Trump. Multiple journalists screen-grabbed the image of Hillary Clinton retweeting the TBS TV show’s account. Just embarrassing and typical. Failed curroptocrat mocks President Trump… fails… and instead is mocked. The circle of politics… gotta love it.