Hillary Clinton is ‘Seething with Rage’ Because She Lost the Election to a ‘Dumb, Soulless Manipulator’ 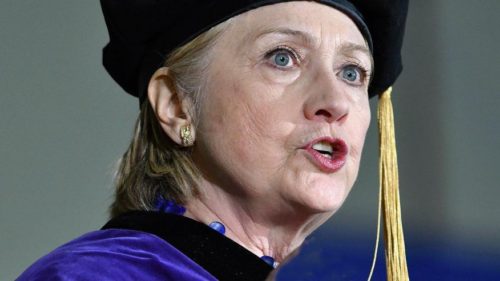 Hillary Clinton lost the Presidential[2] election. Though this appears to be a fact lost on Hillary herself. She has yet to gracefully accept the fair and square results of last November, preferring instead to make the rounds of various media outlets and college commencements, to whine like the sore loser she is.

She irrationally blames Russians, James Comey, “stupid” voters, sexism, racism (huh?) and her own campaign staffers. The one person she never places any blame upon is the only person who bears responsibility; herself. Hillary Clinton was a bitter, angry, issue-less, screechy, morally bankrupt candidate who believed she was entitled to the throne, er, we mean the Presidency. And thankfully, enough Americans saw through her thin veneer of civility to send her packing back to Chappaqua.

After the election, she initially claimed she was just walking in the woods and spending time with her grandchildren. But it seems she simply cannot stand to be out of the limelight any longer. She is appearing more and more often in public, to try to rile up the Democrat base and see if she still has any political traction. But it’s obvious she’s a has-been and the tread on her political life is completely worn off. America has moved on.

In her most recent diatribe, she is described as “seething with rage” because she lost the Presidency to a “soulless manipulator,” of course referring to President Donald Trump. The truth is that if she is looking for a soulless manipulator, she need only gaze into the mirror. She has spent years and years manipulating everyone in her path. She is involved in the deaths of innocent men in Benghazi. It doesn’t get more soulless than that.

Stay home Hillary. The next time we want to hear from a soulless manipulator, we’ll look you up. Don’t hold your breath.

Hillary's friends say she's seething with rage & haunted by losing to someone she considers a soulless manipulator. https://t.co/TLH572ephs[3]