Like Krystal Heath[1], the woman who wrote the excerpt below, I spent several years caring for a disabled quadriplegic. He has a van with a side entry, and that meant that handicapped spots – especially those with those wide, hash marked side parts- were invaluable. In second place would be curbside handicap spots that allowed the ramp to extend directly onto the sidewalk. This gentleman also happened to be my husband. I took care of him for years, until he wanted a divorce, and went on to take care of others with similar needs. I considered it a good use of my nursing license.

It was beyond infuriating to see people, without placards, parking in spots that were not designated for them, or in the white zones with a placard – that’s not a spot. Where I live in Washington State, it carries a hefty fine of $450 to violate the handicapped spots. But, as you guessed, some people are too ‘special’ for laws- and Hillary Clinton is one of them. From Louder with Crowder:[2] 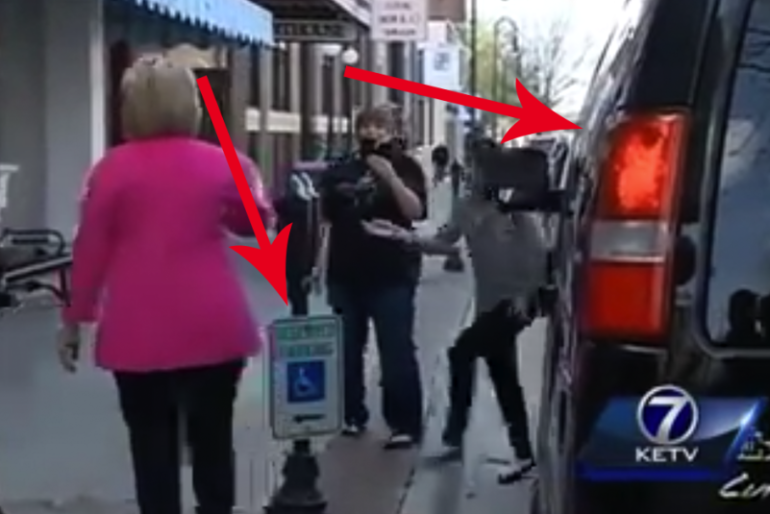 I spent two years as the personal assistant to a gentleman who is a quadriplegic. He is one of the most inspirational, positive people I’ve ever met. It only took my first day of working with him to realize that I really didn’t have anything – ever – to complain about. Does that mean I never complain? No. I’m human. But I’m also aware that my reasons pale in comparison when I do.

As his assistant, I’d regularly help him load into his customized van and chauffeur him around the city of Las Vegas. If that’s not intimidating enough, the guy was a former IndyCar driver. Yeah. That’s right. Little old me, driving a professional racer through the streets of Las Vegas. No pressure.

Mind you, this wasn’t a small van. It was a big van. Parking was no walk in the park.

As a result, I became very much aware of individuals who would park in handicap spaces who weren’t handicapped. It didn’t happen every day, but I was amazed at how much it did happen. I never understood it. Seriously, do you fancy yourself such a human specimen that walking an extra 20 yards would be unfathomable? Do you have any idea how hard it is to find a place to park these vans – let alone find two spaces so we have room to put the ramp up and down? That’s what the extra space with lines between the handicap spaces is there for, genius… not for your brand new Camaro to hang out so it doesn’t get a scratch.

That said… it also frustrates me when people assume because they can’t see anything physically wrong with an individual who parked in a handicap space, that they’re in the wrong. I have a friend who lost her leg in a car accident, but when she’s wearing pants, you’d never know it.

Ok, so MAYBE…and that is a HUGE MAYBE, there is someone who is disabled in Hillary’s crew. Or gee, maybe its just one more thing about Hillary that we don’t know? Either way, I would say she has some serious explaining to do.