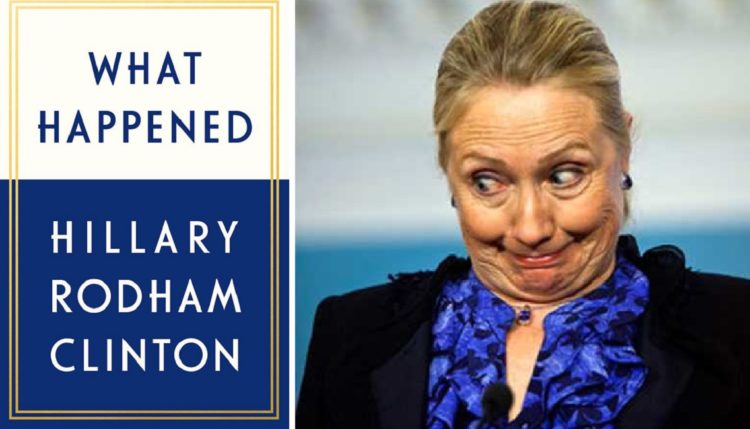 Hillary Clinton just released the name of her new memoir about her 2016 election loss to President Donald J. Trump.

What Happened is set to be released on September 12th.

What happened? WHAT HAPPENED?! Were you too zoned out to figure it out by now? You lost, that’s what happened.

As reported in Free Beacon[2]:

Hillary Clinton’s new memoir will blame her 2016 presidential election loss on Russian interference and former FBI Director James Comey’s announcement that he was reopening the investigation into her emails.

In the past, she has also blamed her private email server investigation, sexism, criticism of her Wall Street connections and bad information from the Democratic National Committee. So far, she hasn’t accepted any of the blame as a personal failing.

The work is being billed as Clinton’s no-holds-barred, tell-all about how and why she fell short of becoming the first woman president, and Clinton has called it the “most personal” book she’s written.

“It will also give readers an idea of what it’s really like to run for president, especially if you’re a woman,”[3] she said.

She’ll go to her grave thinking that she lost because she’s female. Her corruption and her work experience and the nightmare of having Bill Clinton as a First Lady terrorizing the White House interns didn’t cause her to lose. She wasn’t guaranteed to be the President, but she sure thought she deserved it and that it was her turn.

“She really believes that’s why she lost,” said a longtime Clinton ally. “She wants the whole story out there from her own perspective. I think a lot of people are going to be really surprised by how much she reveals.”

Clinton joked in May that her upcoming book would be her “confession” of her various mistakes on the campaign trail.

“Did I make mistakes? Oh my gosh, yes. You’ll read my confession and my request for absolution,” Clinton said.

But social media had their own ideas on what the book should be about:

What Happened will be the democrat creed:

What Happened? She rigged primaries, got millions of illegal votes, colluded w/ dictatorships & the MSM and she LOST.https://t.co/YQVAF1s1mm[9]