From declaring her Presidential candidacy to millions of adoring and zealous followers, to signing her new book in front of toilet paper at Costco. It’s either irony, or some sort of hilarious prank played by Costco, because they know her book is so full of crap.

This is absolutely hilarious and for reasons you don’t quite understand, it will have you laughing for hours. The longer you look at it, the harder you will laugh. 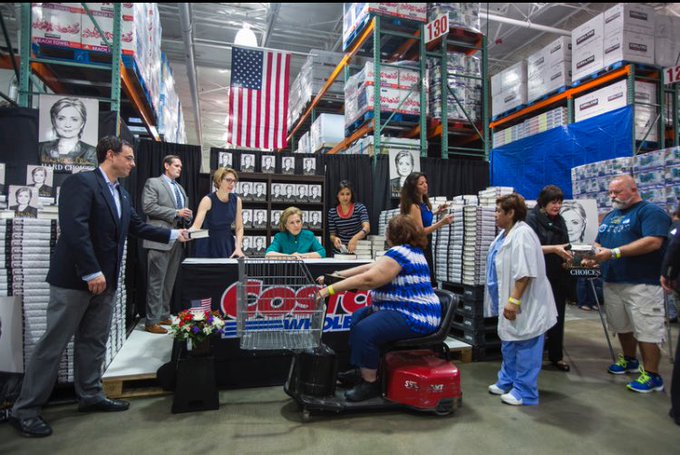 From aspirations of life in the White House to signing copies of her books next to something that belongs in an outhouse, Hillary Clinton has had a difficult year. With all of the bullcrap that comes out of her mouth, perhaps Clinton should set up a permanent residence in that aisle.

Meanwhile, millennial protestors set up shop across the street to protest the appearance of Hillary, chanting “lock her up,” wearing MAGA hats and holding Trump campaign signs.

I genuinely want to feel bad for her, because to be this far along in your life and have absolutely nothing to show for it? That’s just sad. I mean, the only reason she’s even as important enough to sign books in a Costco is because she rode her husband’s coattails to fame. She’s done absolutely nothing to make a name for herself and anything she has done, such as her time as Secretary of State, has ended in abject failure and in the case of SoS, bloodshed. You can’t claim that as a success when your actions got innocent people killed when it could have been avoided.

We are watching her decline in relevance and influence in real time, and it’s fabulous. It couldn’t be happening to a nicer witch and I’m sure the Benghazi 4 and her other victims are watching from their perches in Heaven, enjoying some great beer and watching this the way most people would watch a football game.

I am just going to kick up my feet and watch her implode while America prospers and thrives under a Presidency that isn’t hers. This is the America that we have dreamed of during the last 8 years of the Obama administration and we’re actually here to witness it. It’s beautiful karmic justice and let’s not pretend she doesn’t deserve it. Even the left needs to recognize that she is a sinking ship and jump off like rats.

Perhaps not the best comparison.