Hillary Raises LOTS of Eyebrows With Her Labor Day Plans…

Hillary Clinton will be[1] at the Labor Day parade in Cleveland today… but she won’t be walking it. I don’t think she has the stamina for it, which is really bad. Parades don’t move very fast. The last parade she walked was only four blocks and she was a hot mess when she finished it. Really bad optics and adds fuel to the fire concerning her overall health.

Clinton and Kaine will be speaking at the parade and festival today. Let’s hope she doesn’t descend into another famed coughing fit, get a brain freeze or have to be propped up by a staffer. Geez. 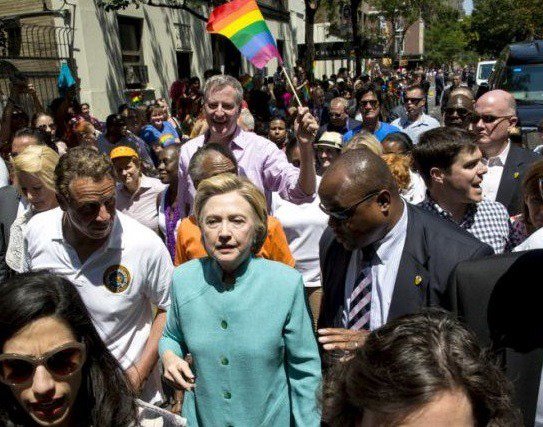 The parade, which will now start at 10 a.m. Monday, will step off at East 146th Street and Kinsman Avenue, the parade’s organizers said Saturday.

U.S. Rep. Marcia Fudge, a Warrensville Heights Democrat who represents the district, will lead the parade to the Kids Village and Senior Pavilion at Luke Easter Park, where residents can meet with elected officials and candidates.

Both Clinton and Kaine will speak at the festival after the parade, event co-chair Susan Hall said.

People who want to attend the speech will have to go through airport-like security, Hall said. Coolers, backpacks, large bags, chairs, umbrellas and other items will be prohibited, Hall said.

The annual event was started 45 years ago by the late Congressman Louis Stokes and features music, dancing and food. It serves as the traditional launch of the general election campaign season.

It’s fitting that Clinton and her sidekick speak on Labor Day… a holiday started by the unions. It honors the American labor movement and is basically communist in nature in my viewpoint. All good Democrats and communists love Labor Day.

The campaign event will take place at Luke Easter Park — on the corner of East 99th Street and Ramona Boulevard — and it is scheduled to begin at 2 pm. following the 11th Congressional District Community Caucus Labor Day Parade.

US Rep. Marcia Fudge[4] will lead the event. She is a member of the Congressional Black Caucus, was involved in Jesse Jackson’s Rainbow PUSH Coalition and is part of the Congressional Progressive Caucus. She is pro-abortion, pro-CAIR and very pro-Black Lives Matter. She’s a stone cold Marxist.

Doors open for the Clinton/Kaine event at noon. Attendance is first come, first served. I’m sure if you have deep pockets, you’ll be given special consideration. The campaign said Clinton and Kaine will “celebrate the resilience and spirit of Clevelanders, Ohioans and American workers.” That’s a nod to the communists of Ohio. Don’t you just love Labor Day?