Hillary Rises From Grave to Warn Us About Afterlife, I Mean Trump [VIDEO]

SMH. Hillary Clinton has indeed[1] risen from the political grave and seems for all the world to have set her sights on 2020. I hate to break it to her, but her health couldn’t take it the last time. She’s too old to run again. But that won’t stop the Hildabeast from cheering on rioters, radicals, freaks and communists. It’s the principle of the thing after all. Tomorrow, the DNC elects a new head and it looks like it could well be Marxist, anti-Semite, Nation of Islam Rep. Keith Ellison. Which would pretty much mean the end of the Dems, but not before they declare outright war on Trump and the Republicans. They will get increasingly radical and violent with Ellison in the lead.

“Let resistance plus persistence equal progress for our party and our country,” Clinton said. In other words, revolt against Trump. Who says you can’t be evil right until the very end? She’s in Atlanta all smiles this weekend, looking to incite an uprising with a big heart, don’tcha know. She says she’ll be with the resisters every step of the way. Right. Young Democrats don’t seem to care for Clinton at all these days. They gravitate towards Bernie Sanders (a communist) who is pushing Ellison. That is very worrisome and very, very dangerous. 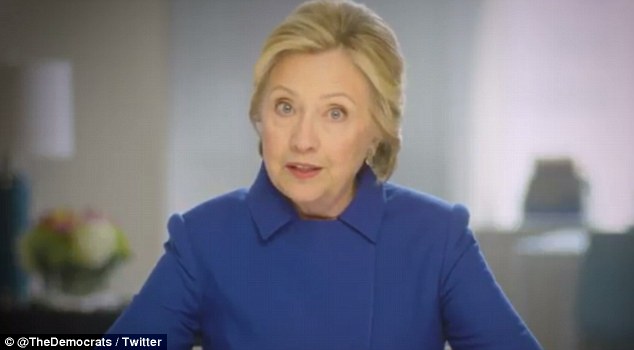 An upbeat Hillary Clinton popped back into the political spotlight Friday with a three-minute address to Democrats, applauding them for being the ‘resistance’ against President Donald Trump.

She urged her party to ‘keep fighting and keep the faith,’ while adding, ‘I’ll be there right with you every step of the way.’

But Clinton’s frequent forays back into the limelight suggest she could still write another political chapter post-2016.

A message from @HillaryClinton[4]: "Let resistance plus persistence equal progress for our Party and our country." #DNCFuture[5] pic.twitter.com/smbxQZQfpV[6]

‘Nearly 66 million votes are fueling grassroots energy and activism and everywhere people are marching, protesting, tweeting, speaking out and working for an America that’s hopeful, inclusive and big-hearted,’ she said with great pleasure.

‘From the Women’s March, to airports where communities are welcoming immigrants, refugees and people of every faith, to town hall meetings where people are speaking up for healthcare, the environment, good jobs and all the other issues that deserve our passionate support,’ she continued, naming the places where progressive activists have taken on Republicans and Trump as of late.

Hillary praises the Women’s March that had every freak in existence out there… all wearing pink p*ssy hats and some dressed as giant vaginas. You had moonbat Ashley Judd screaming that she was a nasty woman and accusing President Trump of incest with his daughter Ivanka. You had Madonna waxing poetic on how she has fantasized about blowing up the White House. They had a convicted murderess speak prominently… and a whole list of other radicals followed her. These are the people that Hillary embraces as followers. She literally has Sodom and Gomorrah on speed dial. She’s the pied piper of perversion.

Clinton is striving for “an America that’s hopeful, inclusive and big-hearted.” But only if you are a radical… if you are a conservative, I’m sure she has a team of speech police at the ready to shut you up. Or rioters who will beat you into submission in the streets. She’s only ‘big-hearted’ if you agree with her. And hope is spelled ‘communism’. She’s baaack… Hillary is as certain as death and taxes.