Hillary Clinton was interrupted for 30 minutes by Black Lives Matter protesters on Friday as she tried to give a speech. Of course, these guys are too dense to realize that scarily enough, Hillary might be their best bet at actually BEING heard – but oh well[1]: 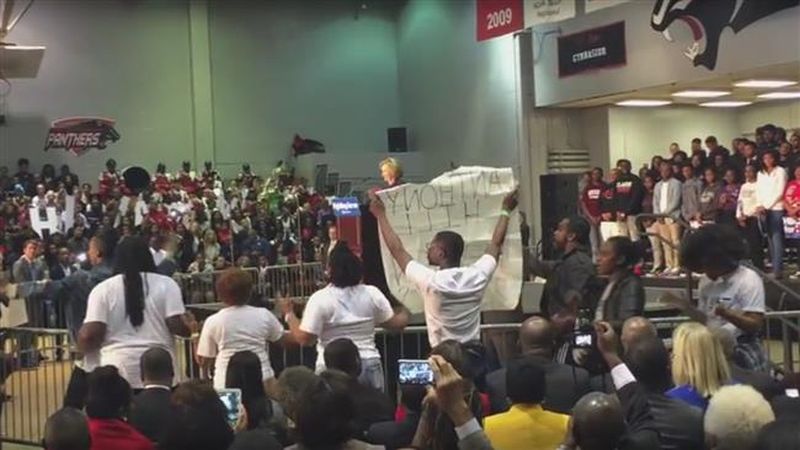 The Democratic presidential frontrunner initially tried to reason with the demonstrators but eventually gave up and attempted to awkwardly talk over them.

Clinton was held up for half an hour as the group chanted loudly, refusing to back down as she tried to continue with her speech at a university in Atlanta.

Just minutes after taking to the stage at Clark Atlanta University, around a dozen protesters burst through the crowd and started heckling Clinton.

She could then be seen squirming on stage, maintaining her grin as she waited for the protest to end.
But according to CNN the shouting carried on for another 30 minutes.

The protesters were urged to stop by civil rights leader Congressman John Lewis, Usher and most of the 2,000-strong audience who chanted: ‘Let her talk.’

‘I’m sorry they didn’t listen, because some of what they demanded I am offering and intend to fight for as president,’ Clinton said. ‘We have to come together as a nation.’

The former First Lady is campaigning in Georgia and South Carolina as she looks to shore up her support in the black community, where pollsters say her Democratic rival Bernie Sanders is struggling.

Both candidates have called for ending mass incarceration and reforming the criminal justice system in the United States, an issue that has become a rallying cry for younger black activists who will play a key role in choosing a nominee.

Clinton called for eliminating sentencing disparities between crack cocaine crimes and those that involve powder cocaine.

The changes would build on a 2010 act of Congress that narrowed the disparity between crack crimes – which are concentrated among minorities – and powder crimes, which are more likely to involve white people.

She has made frank discussion about the country’s lingering racism a central theme of her primary campaign, in an effort to woo the coalition of minority, young, and female voters who twice catapulted Barack Obama into the White House.

Introduced to the stage by civil rights leader and former presidential candidate Jesse Jackson, Clinton highlighted her history of civil rights activism, starting with her first job after law school for a child advocacy organization. And she stressed her determination to build upon Obama’s legacy.

‘It will be up to me assuming we get this done to be a president who builds on what we have achieved and goes even further,’ she said.

Not that I don’t love watching Hillary squirm, but this is just stupid. #blacklivesmatter needs to stop. #alllivesmatter, and we should all be supporting one another instead of dividing the nation by race.