Hillary Watches Flag Fall To The Ground, Watch What Shoes Does To It!! [VIDEO]

After the most Marxist political convention[1] this country has ever seen, there comes one more offense. First, there were communist flags in honor of Bernie Sanders. Then in the convention itself, you saw Palestinian flags being flown. Outside, protesters burned the American and Israeli flags. After conservatives pointed out that there were no American flags inside the convention, the next day the Democrats brought in a few token ones out of sheer embarrassment. A very few. But what Hillary Clinton did while talking to people at the convention, pretty much says it all. As she’s laughing and chatting, one of the American flags falls over and hits the ground. That’s a big no-no. Hillary did nothing at all. 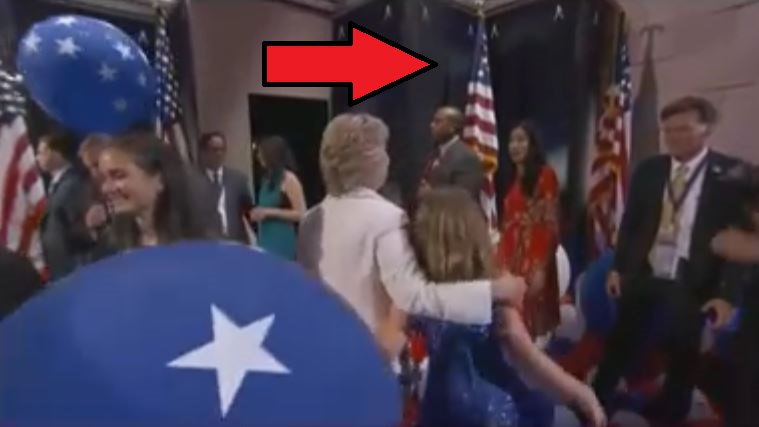 Democrats brought[3] US flags into the convention hall on Tuesday after being publicly shamed by the media.

On Thursday night after the convention was over Hillary Clinton watched a US flag fall and hit the floor.

You know that since Clinton was facing the flag, she caught the movement out of the corner of her eye and saw it go over. It also made noise when it did so. She just didn’t care. Just like she doesn’t care about America in general. It says a lot – the imagery here is striking. Not only didn’t Hillary pick up the flag, no one else did either. I can’t help but think of the incompetence and uncaring of Benghazi when I see this. It strikes me as the same kind of attitude. Trust me, if the Hildabeast becomes president, she will treat this entire nation just as she did that flag… with just as much disrespect. Plunk.