Classic Gowdy here… he questioned FBI Director Comey during the House Judiciary hearing entitled, Oversight of the Federal Bureau of Investigation. “What concerns me Director is when you have five immunity agreements and no prosecution… when you are allowing witnesses who happen to be lawyers sit in on an interview. That is not the FBI that I used to work with,” Gowdy said to Comey on Wednesday.

The DOJ granted immunity to five people who gave nothing in return… five people they knew were exceedingly complicit and corrupt. It was all rigged, setting these people above the law. Comey should be prosecuted for what he has done. 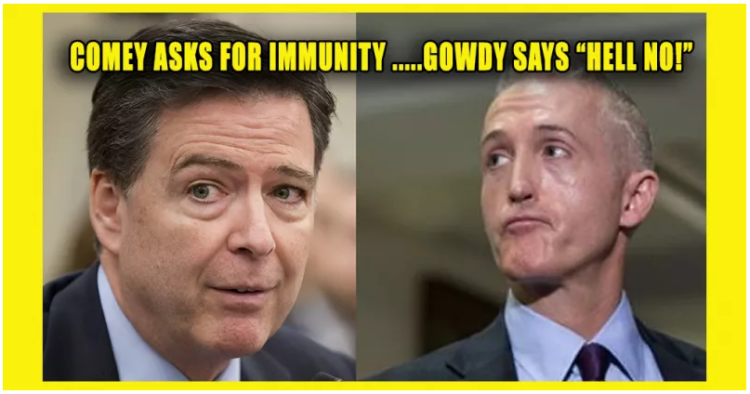 Here we go again, but this time it could be the end for both Hillary Clinton and FBI Director James Comey.

As you’re about to see below James Comey, the current FBI director that let Hillary off the hook for her CLEAR violation of many laws with her email scandal, has now asked for immunity from congress for his involvement in the scandal and the subsequent findings. What what!? Immunity?

That’s right. What Comey is asking for is to be absolved of what he’s done and anything that may happen in the future from any further investigations. How does that not throw up the biggest red flag in American history?!

Well it did to Trey Gowdy and he just ripped Comey a new one and is about to do everything in his power to stop that immunity from happening!

Comey is Clinton’s political handmaiden and we’re shocked that he let her skate? I’m sure he’s been promised that he will not be held accountable over this. I hope Gowdy proves them wrong. More than 200 Republicans sent a letter to Comey demanding to know why he didn’t recommend federal charges against Hillary about her use of private email servers. I guess we know why now.[4] That he would have the nerve to ask for immunity after all this is staggering.