WOW!!! The hits just keep on coming for Hillary Clinton. This is one though where I wish I could see both Michelle Obama AND Hillary Clinton’s faces when this email went public.

Can you even imagine??? 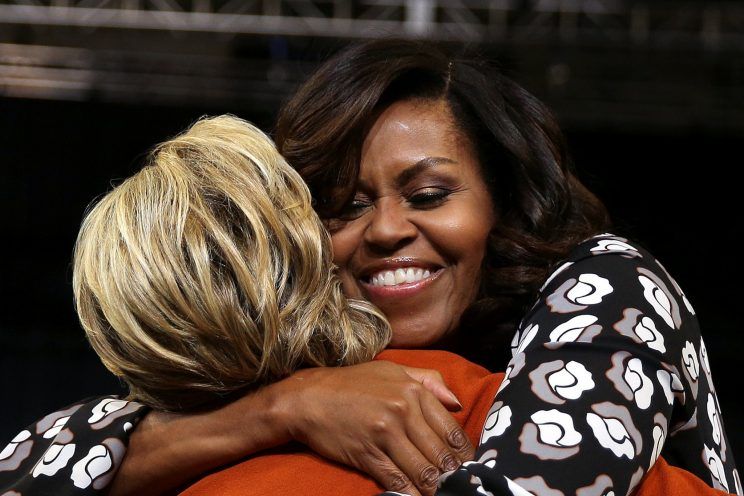 Now, despite all the fake hugs and disgusting looks of FAKE admiration the Obamas and the Clintons were exchanging with one another during Hillary Clinton’s run for president…they don’t like each other. The truth is, they haven’t liked each other for a very long time.

This fact made it even more intolerable to watch how they interacted with one another during the entirety of the campaign together, as if they were the best of friends and nothing could break that bond. Except Hillary losing…that definitely did break even their fake friendship, the Obamas didn’t have to put up a front anymore. They no longer needed her, so she was thrown out with the trash.

Now as you can probably already tell, Hillary Clinton is trying her darndest to make a comeback, but it seems the harder she tries, the harder she falls.

Take this for example… She had just finished putting blame of her loss on the DNC for some reason…and now this email has shown up to bite her in the butt.

Hillary Clinton asked a top aide in 2011 whether she could fly on a separate airplane from former first lady Michelle Obama to Betty Ford’s funeral, according to a newly released email.

“I’d be honored to speak,” Clinton said in reference to Betty Ford’s funeral. “Is it OK that we and Mrs. O take two separate planes?”

Oh, and the emails also reveal Hillary sending even more classified information through her private server according to this report.

But hey, we all know that was no big deal right?

Hillary told us yesterday it was the “biggest nothing burger ever”.

Um Hillary…no. You got it twisted, the biggest nothing burger ever was your 2016 presidential campaign and that is the truth lady.

By the way, if you didn’t catch Hillary’s interview where as usual she speaks out of her butt then you HAVE to watch it now.

In it she literally blamed every Tom, Dick, Harry, their dogs, cats, moms, dads and anything else possible for her loss last year, and shamelessly claims that the Trump Russia nonsense is all true. The woman is delusional and it became VERY real while watching her interview, which you are about to witness for yourself.