Americans everywhere had some serious questions after it was revealed that Attorney General Loretta Lynch and Bill Clinton had a clandestine meeting on a plane. This came at a time when Hillary Clinton was being investigated for having an unsecured email server in her home and many people cried foul.

Bill Clinton claims that the pair talked about families and grandchildren, but many of us were extremely skeptical about that. (Unless it went something like, “If you ever want to see your grandchildren again, you’ll find Hillary Clinton innocent of any wrongdoing.) 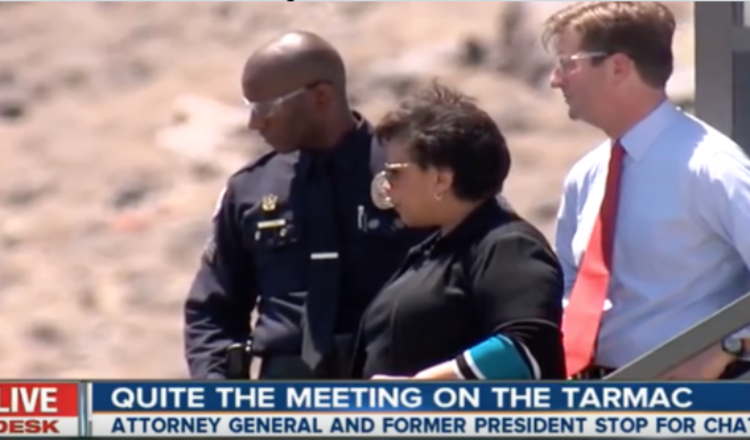 Well, Judicial Watch has been pursuing this since the story broke and they’ve finally make some headway. I say “some” because a lot of the information has been redacted[2], which is typical.

Judicial Watch today announced that the Justice Department refuses to disclose the talking points developed by the Obama Justice Department to help it respond to press inquiries about the controversial June 27, 2016, tarmac meeting between Loretta Lynch and Bill Clinton at Phoenix Sky Harbor International Airport.

The Justice Department heavily redacted the documents under Exemption b (5), which allows agencies to withhold draft or deliberative process material. The blacked-out material centers around talking points drafted and used by Justice to respond to press inquiries about the Lynch-Clinton meeting.

If the meeting was just about their grandkids, why would they need to redact anything? Doesn’t that smell fishy to anyone else?

Thought they talked about grandchildren….. https://t.co/V8ovi2xcB5[4]

Definitely in the "You can't make this stuff up" category. Wow. https://t.co/mnZltQLsHA[6]

I think we need to get AG Sessions on this, because this seems terribly contradictory. The redaction doesn’t seem to have been necessary if the meeting was social, like they claimed. The fact that the phrase “primarily social” was used indicated that there were other things discussed. That’s what America wants to hear about. In fact, I assert that we DESERVE to know what happened that day.