JUST IN: New Hillary Email Leaked And It Points Right At George Soros…

And another shoe drops[1] right splat on top of Hillary via WikiLeaks. This one’s a doozy… Courtesy of George Soros no less, who seems to have given Clinton orders on how to handle Albania while she was Secretary of State. Bad Hildabeast, bad, bad.

Since when does a sitting Secretary of State take instructions from an evil, Marxist old spider like Soros? Well, since we have someone like Clinton who is bought and paid for over and over and over again. She’ll literally whore her influence to anyone that can afford it.

Not only does Soros tell her to take action on Albania and put pressure on the Prime Minister there… he orders her to appoint a senior European official as the mediator and gives her three choices. I know you will be shocked that she absolutely complied. This is what Soros does to foment revolt and unrest, so he can become even more wealthy and powerful. He is a puppet master. 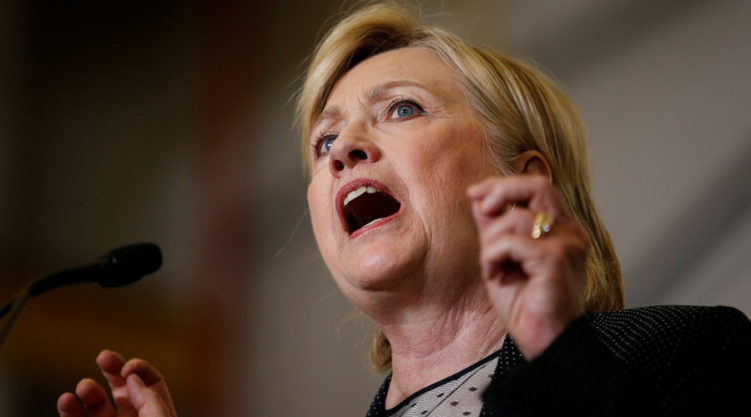 Washington, D.C. – Contained within WikiLeaks’ recent release of hacked DNC emails is a message from billionaire globalist financier George Soros, to Hillary Clinton while she was U.S. Secretary of State, that clearly reveals Clinton as a puppet of the billionaire class.

Found within the WikiLeaks’ Hillary Clinton email archive[4] is an email with the subject ‘Unrest in Albania[5],’ in which Soros makes clear to Clinton that “two things need to be done urgently.” He then directs the Secretary of State to “bring the full weight of the international community to bear on Prime Minister Berisha” and “appoint a senior European official as mediator.” Revealing the influence he wields within the corridors of power, Soros then provides Secretary of State Clinton with three names from which to choose. Unsurprisingly, Clinton acquiesced and chose one of the officials recommended by Soros — Miroslav Lajcak. 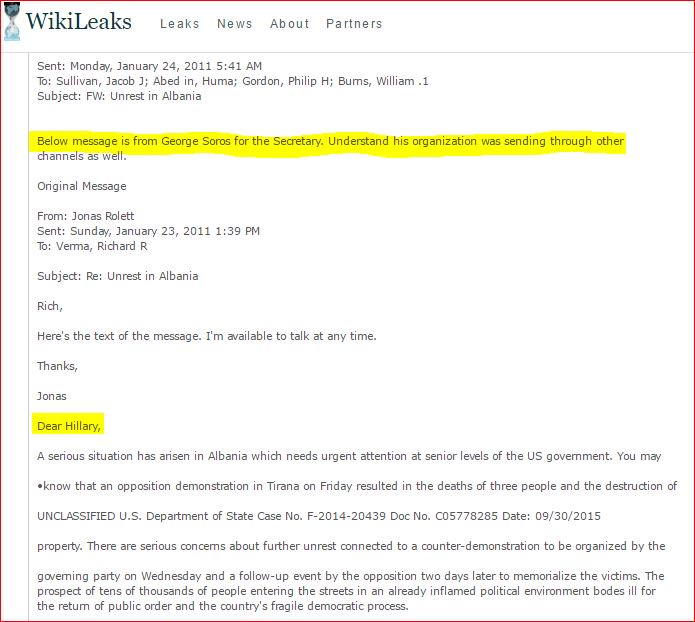 This is standard operating procedure for Soros. Anyone familiar with the history of the Soros Open Society Foundations in Eastern Europe and around the world since the late 1980’s, will know that his supposedly philanthropic “democracy-building” projects in Poland, Russia, or Ukraine in the 1990’s allowed Soros the businessman to literally plunder the former communist countries wealth, according to the New Eastern Outlook[7].

Soros-affiliated organizations are deeply connected to numerous color revolutions, the Arab Spring, and a number of other uprisings across the world. They have been intimately involved in the coup that took place in Ukraine, and subsequent ratcheting up of Cold War tensions with Russia.

In this particular instance, puppet master Soros instructs the U.S. Secretary of State that “the U.S. and European Union must work in complete harmony over this,” exposing how far his influence in international relations extends.

Notice how Soros[8] seems to be calling the shots in the European Union and the US now? Notice how Hillary is nothing more than a puppet? How do you feel about a Marxist controlling officials that are high up in our government? It should terrify you, because much, much worse is coming if the TPP is put in place. A one world currency and government is coming, as is war and civil unrest.