Wow… I did not see this one coming.[1] The Huffington Post just turned on Hillary Clinton and The Clinton Foundation with a vengeance. If you are a leftist and you’ve lost the support of HuffPo, you are in serious doo doo.

It would seem that Clinton Cash and the exposure of Clinton’s graft is making a whole bunch of people nervous. Huffpo is now flatly telling Clinton to just shut down The Clinton Foundation – immediately. Nothing screams panic like the media when things go bad. 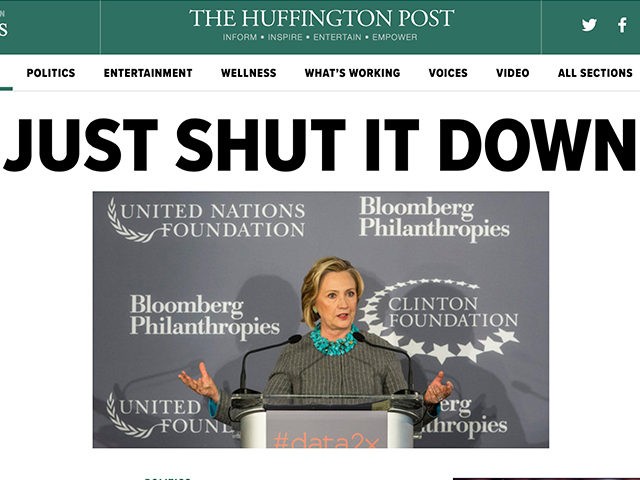 The Huffington Post, one of the world’s most trafficked news sites, featured a headline on Sunday calling for the closure of the embattled Clinton Foundation. The left-wing outlet’s front page banner linked to a New York Times article[3], which highlights, among other things, that Bill and Hillary Clinton’s billion dollar nonprofit has “accepted tens of millions of dollars from countries that the State Department — before, during and after Mrs. Clinton’s time as secretary — criticized for their records on sex discrimination and other human-rights issues.”

The Huffington Post is just the latest outlet to acknowledge that the explosive research, found first in Breitbart News Senior Editor-at-Large Peter Schweizer’s New York Times bestselling book Clinton Cash[4], has inspired a massive movement of journalists and political figures — on the left, right, and center — calling on the Clintons to dismantle their problematic nonprofit.

The Times piece shines the spotlight on “a deal involving the sale[5] of American uranium holdings to a Russian state-owned enterprise” — another revelation first revealed inClinton Cash[4] — “… which involved major Clinton charitable backers from Canada …” as “another example of the foundation intersecting with Mrs. Clinton’s official role in the Obama administration.”

Clinton has been harangued over pay-for-play corruption non-stop over the last couple of weeks. She sold favors and powerful positions while she was Secretary of State. Even if The Clinton Foundation goes away, that doesn’t erase all the dirty dealings that have gone on and will nip at her heels as she runs for the presidency.

In a mind-blowing sign of weakness, Bill Clinton told a room full of the foundation’s staff on Thursday that he will resign from the Clinton Foundation board if Hillary Clinton wins the White House in November. The former president also pledged to stop giving paid speeches, regardless of the outcome of Hillary Clinton’s presidential bid. That does not make it all better Bill… not by a long shot. Bill’s pledge is a tacit admittance of wrong doing. I also suspect that Bill Clinton is not well.

The Clinton Health Access Initiative (CHAI) and the Clinton Giustra Enterprise Partnership (CGEP) said they would continue to collect donations no matter what happens in November. How’s that for arrogant? They’ll just shift where the money is laundered.