I’m not shocked by this at all.[1] Hillary Clinton is not appealing to 18-29 year-old voters. They went for Obama, but just can’t get into the Hildabeast. That voting segment seems to prefer Libertarian Gary Johnson according to FrontPage Mag. Who by the way, is not all that much better. But he is hipper and he definitely inhaled.

Before you start doing a snoopy dance though, I think this sentiment may change before the election. Clinton is aggressively pursuing the young Millennial vote. She’s determined to gather to her bosom those that followed Bernie Sanders. I’m not sure how that will work as most of them despise her. I think it would be more likely they would go with Trump or some other candidate. With the crappy selection we have this time around, who knows? 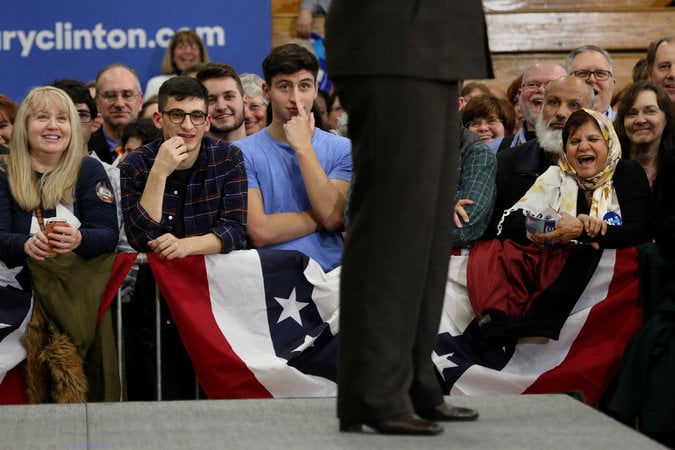 The actual origin of the quote though appears to be John Adams[3].  “A boy of 15 who is not a democrat is good for nothing, and he is no better who is a democrat at 20.”

Democrats tend to perform better with younger voters. Obama won the 18-29 vote by 66 to 32 against McCain and 60 to 38 against Romney. Hillary however is underperforming[4] at 38 to 27 with 19 percent going to Gary Johnson.

Maybe Hillary needs to talk about how she inhaled.

You can’t believe the polls or the mainstream media this time at all… they are manipulated and skewed. They just downright lie, so who knows what is real anymore? I’d go with my gut on this one. I’m not voting for any of the above and will probably write in Ted Cruz. But the young people out there are looking for someone that speaks for them… that indeed may be Gary Johnson this time around, but he won’t win. I still expect Clinton to walk off with the presidency – which will be a living nightmare.

According to the latest Pew poll[5], Clinton led Trump 38 percent to 27 percent among 18-29 year-olds, with Johnson at 19 percent and Stein at 9 percent. That is, Clinton was winning a smaller share of under-30 voters than she was of voters overall. What this tells us is young voters think all of the above basically suck and I agree. It is the worst election ever. #NeitherOne2016