Hillary Clinton has the worst timing in the world.[1] Last week, just before 12 officers were shot in Dallas, killing five of them, she was supposed to be at a Black Lives Matter rally. Then she went on CNN and pandered for the black vote by blaming white cops for the deaths of black men. She was capitalizing on the shootings of two black men, one in Minnesota and one in Louisiana, last week. It has come to light one of those shootings was justified and the other is still being investigated – although the victim in that case also had ties to BLM. I don’t see Clinton coming out and defending police after innocent officers were gunned down in cold blood. I guess there aren’t enough votes in it for her to make it worth her while. 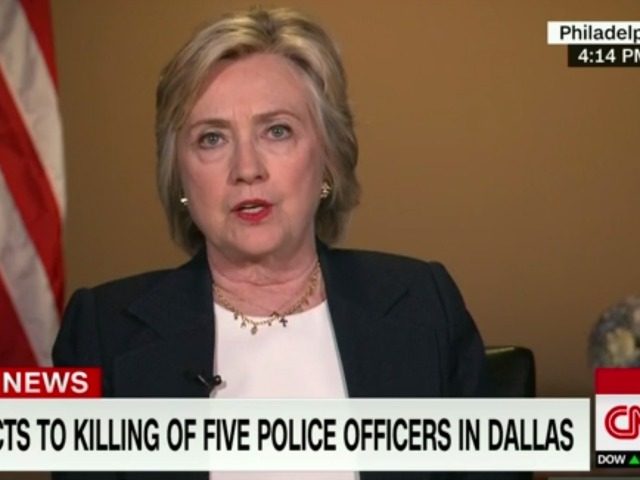 Hillary Clinton used a CNN interview on Friday to completely embrace the Democrats’ claim that white people and cops must change to help reduce the number of African-Americans killed in tense exchanges with cops.

“I will call for white people, like myself, to put ourselves in the shoes of those African-American families who fear every time their children go somewhere, who have to have ‘The Talk,’ about, you now, how to really protect themselves [from police], when they’re the ones who should be expecting protection from encounters with police,” Clinton told CNN’s Wolf Blitzer.

“I’m going to be talking to white people, we’re the ones who have to start listening to the legitimate cries coming from our African-American fellow citizens,” she said.

“We’ve got to figure out what is happening when routine traffic stops, when routine arrests, escalate into killings … Clearly, there seems to be a terrible disconnect between many police departments and officers and the people they have sworn to protect,” she said.

Federal policing guidelines are needed because “we have 18,000 police departments… [some of which need more training to] go after systemic racism, which is a reality, and to go after systemic bias,” she said[3].

“We’ve got to start once again respecting and treating each other with the dignity that every person deserves,” she said.

On CNN, neither Blitzer nor Clinton suggested that African-American communities have a role in reducing police-encounter deaths, which usually occur in tense engagements between a few cops and a few suspects with extensive criminal histories. It’s just a fact that young black men commit many more crimes than other races. It’s a cultural thing and an individual responsibility. You can’t blame consequences on those who enforce our laws continually. These people want the rule of law done away with so they can do as they please without having to worry about cops ruining their fun. Clinton suggested that people who disagree with her agenda are racists. “There is so much more to be done… we can’t be engaging in hateful rhetoric or incitement of violence, we need to be bringing people together … we need more love and kindness.” No, they aren’t racists because they don’t agree with her… but she is definitely a racist and she is a calculating, slithering politician as well. It’s an outrage that in the shadow of so many officers dying, she blames the police and not the ones truly at fault. Typical leftist.