Boy, this appearance did not go well[1] for the Hildabeast. She was at a campaign rally in Los Angeles. It started out like she expected it to with her trained sycophants shouting, “Hillary!, Hillary!, Hillary!” And then it went sideways. People started yelling, “You’re not welcome here!” These were queer and women’s activists evidently. They were screaming that Clinton was directly responsible for the deaths of thousands of political activists in Honduras. Hillary was on the stage for less than a minute with that fake smile plastered on her face. She tried to act like nothing was happening and exited the platform to make a quick getaway. Embarrassing doesn’t quite cover it. 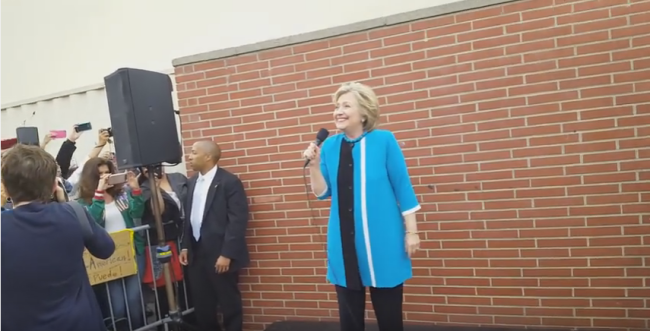 According to video footage in one tweet,[3] Hillary Clinton spent less than a minute at a campaign rally in Los Angeles, due in part to an aggressive group accusing the former secretary of state of being responsible for the deaths of thousands of political activists in Honduras.

Accosting the Democratic presidential candidate, voices can be heard shouting, “Hillary Clinton, you’re not welcome here.” The shouts grew louder, coupled with accusations Clinton is personally responsible for the death of Berta Cáceres.

They accused Clinton of supporting the coup in Honduras and the death of Berta Caceres. They are speaking about a military coup that took place in 2009 that overthrew democratically elected President Manuel Zelaya. Instead of working to restore power to Zelaya, the US State Department, led by Clinton, responded by backing members of the coup. Now her Honduran chickens are coming home to roost. Before she was murdered in the subsequent post-coup violence, Cáceres, a Honduran indigenous rights and environmental activist, accused Clinton of direct responsibility for the violence in her country. That violence later claimed Cáceres’ own life. I have no doubt that is true. Though I don’t support their causes, these people have a right to be furious at the murdering and complicit ways of Hillary Clinton. She’s had blood on her well-manicured hands for a very, very long time. The murdered activist was pushing for Zelaya’s return to power but the US wanted to help form a unity government and hold elections following the coup. As a result of the coup, the murder rate, which was already one of the highest in the world, increased by 50%. In her memoir Hard Choices, Clinton writes of the events surrounding the coup and subsequent US intervention. “In the subsequent days [after the coup] I spoke with my counterparts around the hemisphere, including Secretary [Patricia] Espinosa in Mexico,” Clinton writes. “We strategized on a plan to restore order in Honduras and ensure that free and fair elections could be held quickly and legitimately, which would render the question of Zelaya moot.” Once again, Clinton meddled where she had no business doing so and got people killed.