Is there anyone on Mueller’s team that ISN’T a Clinton sycophant? Just asking, because it seems that way to me. One of the ‘pit bull’ attorneys for Special Counsel Robert Mueller evidently attended Hillary Clinton’s election night party in New York City. This tid bit comes from the Wall Street Journal, who is pretty reliable. The attorney’s name is Andrew Weissmann. Attending that shin dig was just one of a number of troubling signs pointing to bias from this guy. Weissmann has been described by The New York Times as Mueller’s “lieutenant” and “pit bull.”

While the Wall Street Journal put this out, it was Judicial Watch once again that dug it up. They received an email on Tuesday that revealed that Weissmann praised former Acting Attorney General Sally Yates’ defiance of Trump. That should have gotten Weissmann canned right then and there, but of course, it didn’t. “I am so proud. And in awe. Thank you so much. All my deepest respects,” Weissmann wrote to Yates on Jan. 30th. The email followed Yates’ instruction to the DOJ not to defend an executive order banning immigration from seven nations, an act that led to her dismissal by President Trump. It was outright defiance and mutiny. Yates was eventually kicked out and replaced thank goodness. 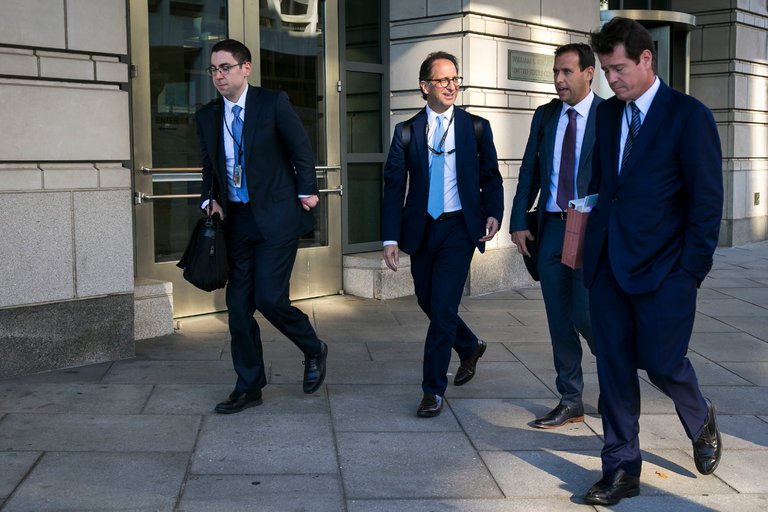 Andrew Weissmann, second from left, and other members of Robert S. Mueller III’s legal team outside the United States Courthouse in Washington in September. Credit Al Drago for The New York Times

Weissmann is just one of a number of Democratic donors that has been retained by Mueller, who ironically, is a registered Republican. Weissmann donated a total of $6,000 to the presidential campaigns of Barack Obama and Hillary Clinton. He’s a leftist’s leftist and he is as biased as they come. Why Trump isn’t firing Mueller after he stacked his team with Hillary lackeys is beyond me. Consequences be damned… Trump needs to fire Mueller. They are looking to nail him any way they can. They tried Flynn, which hasn’t worked, but they’ll keep at it. Such a close friend of James Comey should never have been on the selection list to begin with.

It was Weissmann who oversaw the predawn raid of Manafort’s Virginia residence in July, when federal agents picked his lock and prosecutors communicated their intention to indict him. “There’s a name,” conservative radio host Rush Limbaugh warned listeners last week, recapping the “intimidating technique” afoot. “Weissmann.”

Despite White House Press Secretary Sarah Sanders claiming in October that Mueller’s investigation would end soon, it doesn’t look to me that way at all. I think it will drag on into next year for sure. “The President’s lawyers are sleepwalking their client into the abyss,” Roger Stone, a Trump confidant, told the Journal. I despise Roger Stone. Always have, but he’s not wrong here. I would bet that if you looked at everyone involved, Weissmann would be the norm and that ought to worry the President a great deal and Americans in general.