It took Hillary Clinton five long days to come out with a tepid statement against sexual predator and all around pig, Harvey Weinstein. She didn’t really condemn him and claimed she didn’t know about his extracurricular activities. She’s lying. All of Hollywood knew and being as close as Bill and Hillary were to Weinstein, they had surely heard the rumors. They ignored them because of the money, power and fame associated with Weinstein. She didn’t even release her own statement, she had her spokesperson do it from his Twitter account.

Clinton was asked if she will donate the money Weinstein gave her to charity as other Democrats are doing. Her answer is a sugar coated lie, just as you’d expect. When she answered, she worked at looking offended as she usually does. It was another of her infamous death stares for daring to ask her such a thing. Her campaign received $17,400 from Weinstein, but that was only the icing on this evil cake. She probably received millions in bundling and fundraising connected to Weinstein. And of course, there’s that $250,000 he gave to the Clinton Foundation. 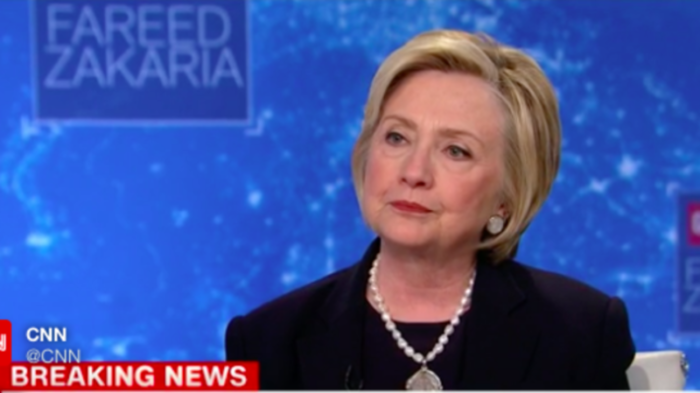 Fareed Zakaria actually asked the Hildabeast if she considered Weinstein a friend. She said, “I probably would have.” She acts like he was someone she barely knew, when the exact opposite is the case. Clinton stated, “Well, there’s no one to give it back to. What other people are saying, what my former colleagues are saying, is that they’re going to donate it to charity, and of course I will do that,” Clinton said on CNN. The donations will be a part of the 10 percent of her income that she donates to charity every year, but Clinton was not specific on how much that amount is, when it would be, or where the money will go. “I give 10% of my income to charity every year,” she said. “This will be part of that. There’s no doubt about it.” WTH?

First off, I highly doubt she gives anywhere near ten percent of her income each year to charity. I’d need to see that one in writing. Second, is she saying ten percent of her income or of what he gave her? If she’s giving it back as a ‘normal’ ten percent to charity, how does that in reality account for any of the money he gave her at all? Will she give back the $250,000 he gave her foundation? Not a chance in hell. And if she gives anything back at all, she’ll do what the DNC did and give it to leftist charities. That’s like donating to herself.

Hillary Clinton doesn’t have the best reputation in the world for keeping her word either. When Backpage got in hot water for allegedly running ads that were related to child prostitution, many Democrats who received donations from them also said in that case they would give the money away. Hillary had been given $5,000. She never gave it back, she kept it. So, I would say the odds of either the Clintons or Obamas giving any of that money to a bona fide charity are less than zilch. Just sayin’.

#Hillary[4] says will give back her #Harvey[5] donations."i give 10%to charity so it will be part of that" thats not returning anything. Lie again

Clinton says she's going to give the Weinstein donations to charity. Yeah, which one, Hillary? The Clinton Foundation? #ThursdayThoughts[10]