This is possibly one of the most[1] tone-deaf, pandering bits I have ever heard. And it figures it comes from Hillary Clinton. Sheriff David Clarke let her have it Friday on Fox News when he heard what she had to say about gangs. Clinton said that joining a gang is like having a family. Either we are going to have positive gangs or positive alternatives for people. Just wow… the casual racism is thick here. Next she’ll be saying that Muslim neighborhoods are so diverse, that Sharia law can be a positive. Positive gangs? Really? Clarke is right, she’s totally disconnected from life in the black community and she is talking straight out of her bum. This is the soft racism of talking down to blacks and assuming they want a gang culture. It’s disgusting. 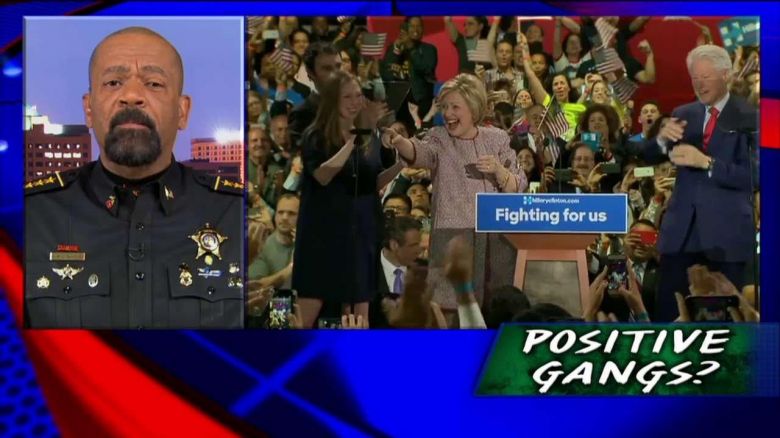 “Joining a gang is like having a family,” Clinton said. “It’s feeling like you’re part of something bigger than yourself.”

“Tucker, I’m still trying to get my head around this,” Clarke said. “Joining gang is like joining a family. Mrs. Bill Clinton is totally disconnected from life in the black community. She has such a misperception about our intelligence level. She thinks we’re some lower form of intelligence to think because we don’t have family experience we should join a gang. That is preposterous. Why didn’t she say make better lifestyle choices? If you want to join something, why don’t you join a church? Why don’t you join the Boy Scouts or the Girl Scouts? How about the boys clubs and girls clubs?”

“To sit up there and suggest that we — that is dysfunctional culture, gang activity,” Clarke continued. “For her to sit up there and embrace this as if it’s something that’s socially acceptable in the black community, this stuff ought to be rejected out of hand. It ought to be shunned and shamed by the black community. The reason why there’s no family structure in the black community, she should offer an apology, is because of failed liberal urban policies, the war on poverty, that totally destroyed any structure or any family unit in the black community. And she should have brought that up and said we’ve got to change policies so we can help the black community reconstruct that family experience so kids can make better lifestyle choices.” Get rid of all the Progressives and we’ll go a long way towards helping black communities. Conservatism is the answer with lower taxes and more jobs. Turning back to God is also a big part of this. Clarke gets it right again. Hillary is no friend to blacks or anyone else for that matter.