SNL Star Gets Tattoo of ‘Badass’ Hillary Clinton – Not Cute 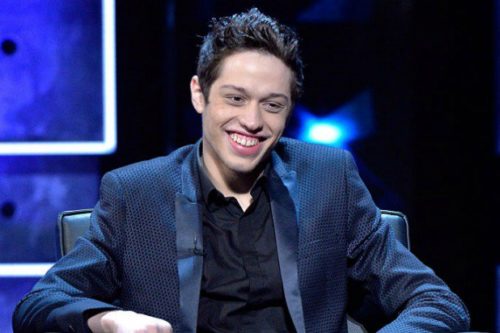 In what can only be termed an attempt to out-cuckoo the rest of his Leftist cohorts, Pete Davidson of Saturday Night Live has taken a drastic permanent step. He has had a picture of Hillary tattooed on his leg. Yes, that’s right, this guy tattooed a picture of the losing candidate in last year’s Presidential election onto his leg, where he will have to see it every day. And apparently, in his mind, that’s a good thing. The comedian posted a picture of it on Instagram and tagged Hillary Clinton, saying, “Wanted to get @hillaryclinton a Christmas gift so I got a tattoo of my hero. Thanks for being such a badass and one of the strongest people in the universe ???? Tatt by @jonmesa.”

Hillary’s response to this act of adulation was, “Thanks, @petedavidson, This makes it significantly less awkward that I’ve had a Pete Davidson tattoo for years. But seriously, I’m honored. Merry Christmas my friend.”

Jon Mesa of No Idols Tattoo in New York, confirmed that the tattoo was both real and permanent. He is the artist who created the er, ‘likeness,’ of Clinton on Davidson’s leg. “Yes, its real. Just did it last night at my shop No Idols Tattoo on Bowery and Grand! It’s a small one on his right leg.”

Davidson has been on Saturday Night Live since the age of twenty. He is now twenty-four. He regularly skewers President Trump in skits such as “Weekend Update.” He is known for his rabid anti-Trump bias both onstage and off.

President Trump has criticized the show saying, famously, that it’s not funny and really bad television. See tweet below. 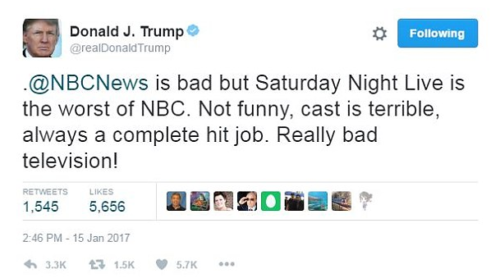 Very classy, Pete. No wonder your show has gone so far downhill. It’s little more than a bunch of Liberals patting each other on the back and cracking tasteless jokes about people they don’t like, meaning Republicans. Sounds a lot like bitter sore losers whining and complaining. The Left still can’t move past their massive defeat in the Presidential election. It shows in everything they do.

The sycophantic adoration the Left has for Hillary Clinton is beyond weird. She lost. She’s not the winner, she’s the loser. And getting a tattoo of her, pretty much tops it all. That’s the action of an unhealthy level of fandom. It’s also an indicator that Davidson may need an intervention. Has anyone told him that Hillary lost yet? This is going to come as a serious shock to Hillary’s number one fan. Trump is right. SNL isn’t funny, it’s really very poor quality entertainment. The question is, does anyone watch it any more? 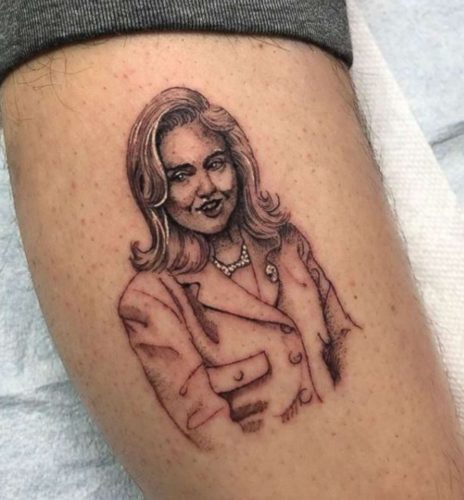