Top U.S. General in House Testimony on Benghazi: We Did Not Even Try to Save American Lives

If it were any other time in the history of this country, Benghazi would be a career-ending scandal, but thanks to the echo-chamber media, the Obama administration has been able to successfully cover up the details. But they may not be able to much longer — one high-ranking military officer isn’t keeping quiet anymore. 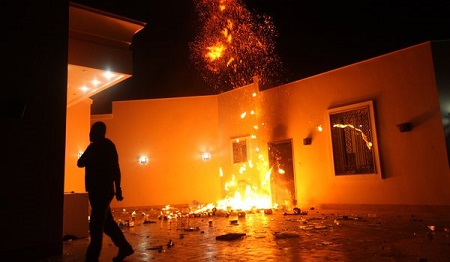 A high ranking officer in the U.S. Africa Command on the night of the Benghazi attacks is now saying that the U.S. military did not try and was never even ordered to save the Americans under attack at the U.S. diplomatic outpost on the September 11, 2012 attack.

In explosive testimony before the House Committee on Oversight and Government Reform, retired Air Force Brigadier General Robert Lovell, said bluntly about the military’s response on the night of the Benghazi attack: “The discussion is not in the ‘could or could not’ in relation to time, space and capability, the point is we should have tried.”

In many ways, this contradicts the testimony of more senior military officers such as former chairman of the joint chiefs of staff, Admiral Mike Mullen, who have said the assets were not in place on the night of the attack to get to the Benghazi diplomatic post and nearby CIA annex in time to make a difference.

Four Americans died that night who didn’t have to died, and the Obama administration’s response to all of this was to ask why it even matters. The most sickening part is that the person who played one of the biggest roles in this massacre is poised to be anointed as our next president by her party.