Trey Gowdy Has Had It With Hillary Being Treated Like She’s Above The Law – Throws Down On Lynch! [VIDEO]

There is no one better out there[1] at tearing someone apart legally than Trey Gowdy. He’s a pit bull. He ripped into Loretta Lynch over Hillary Clinton skating federal charges nine ways from Sunday. He said questioning her was a total waste of time. That Lynch was so busy protecting her presidential candidate she couldn’t be bothered with the truth or doing her job. He stated there were two sets of laws… those for people like the Clintons and a set for the rest of us. Lynch didn’t answer a single question put forward by Gowdy. Not one. Gowdy correctly stated that the Clintons are acting above the law. This is not how it is supposed to work here in America. 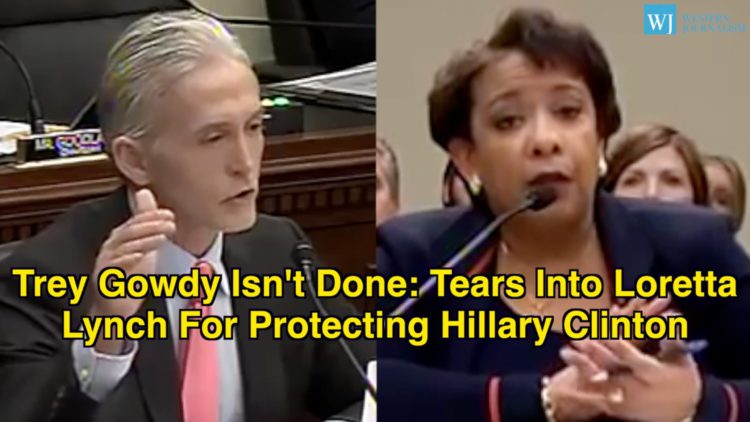 GOWDY: It was a total waste of time and a total disservice to my fellow citizens. Prosecutors have a lot of power in our justice system, Bill, a lot of power. And it’s not asking too much to ask prosecutors to explain their charging decisions or their decision not to charge. She could have answered every one of those questions, she just chose not to. You take the facts – as Director Comey gave them to us and as he found – you apply the law which is public and everybody knows what it is. But the facts are embarrassing for her presidential candidate so discussing the facts necessarily leads to more questions like, “Well if you had all those good facts, why didn’t you indict?” She doesn’t do well in that conversation.

Gowdy went on to nail it even further: “What it gives me is a reason to understand those people who think we have a two-tier justice system because poor folk do not get to sit on the plane, or the spouses of poor folks do not get to sit on the plane with the attorney general for 30 minutes. But if you’re powerful and have a position of influence and you have the right last name then you can do things the rest of the world can’t do and that’s why people don’t have confidence in the justice system.” If any of us had done a fraction of what Clinton did, we’d be in prison for the rest of our lives. This is a mockery of justice. Jason Chaffetz really hit it home: “They are treating her different and I worry that there are two tracks of justice. That Lady Justice takes off the blindfold if the name is Clinton. And that I think is at the root of why America is so concerned about this. There are two different standards. Because if you’re the average Joe, doing your job, sharing classified information, you’re probably going to be in handcuffs and you’re probably going to jail.” The rule of law is all but dead in America now. Lady Justice has been violated by Marxists and the Clintons.