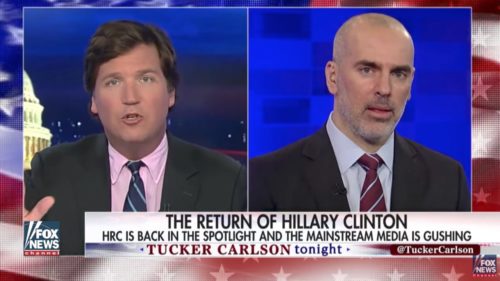 Big news! Hillary was treated unfairly[2] by the media, that’s why she lost! And while we are all drying our tears about that travesty of justice, let’s remember, that according to Peter Daou, a former 2008 Hillary campaign adviser, “The playing field was leveled against her unfairly. Hillary Clinton did not face a fair playing field.”

As always, an “unfair playing field” to the Democrats is any playing field on which they did not secure victory. Silly Democrats, just because you lost doesn’t mean it wasn’t fair. It was completely fair, Americans voted. They didn’t pick Hillary…twice. So, let’s just get a grip on our emotions and stop blaming the press. If anything, the press was squarely in Hillary’s camp. Does anyone remember all the sobbing “journalists” on television the night of the election, when it became clear that Donald Trump had won the Presidency? Yeah, that’s Exhibit A to make the case that the playing field was actually tilted toward Hillary, with almost every major media outlet publicly siding with Clinton and just as publicly, attacking Trump.

On his show, Tucker Carlson tried to work his way through a discussion on this subject with Daou. And despite Tucker’s trademark quizzical expression exclusively reserved for guests who don’t know what they are talking about, Daou didn’t back down on his unwavering support for Hillary and his assertion that she was treated unfairly.

Daou kept bringing up a Harvard study, as if anyone believes those folks are unbiased. Harvard is notorious for its liberal leanings. And Tucker apparently knows the journalists who did the study and can vouch for that fact. But none of that swayed Daou, who continues to vow his loyalty to Queen Hillary, no matter what.

Ah well, no matter. Hillary lost. And if she wants to cry and whine about it forever, that’s certainly her prerogative. But we don’t have to listen.

In John Hawkins’ new book, ‘101 Things All Young Adults Should Know’, he teaches in number 85, “You are not a victim.” This is something Hillary needs to learn. Get a copy of this book for someone you love!