This is just getting pathetic.[1] A restaurant owner in Florida took exception to Hillary’s “basket of deplorables” remark. So on his sign outside, he made a statement: NRA Member… Concealed Carry OK… Not a Deplorable… Vote Trump. This enraged Hillary Clinton supporters who began to mobilize to protest the restaurant. You would think that would actually be a threat since she has 57 offices in the state of Florida and Trump has six. You would be wrong.

The owner of the restaurant, Bill Davis, called Trump supporters and they decided to counter the Clinton mob even though they had a 24-hour head start. It wasn’t even a contest. 16 Clinton supporters showed… over 100 Trump supporters made them look weak to say the least. Florida is a must-win state for Clinton. Looks to me as if she is in serious trouble there. 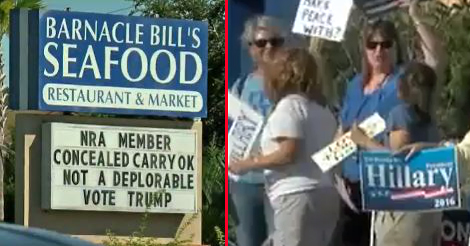 But when they got there, the Democrats found themselves outnumbered — more than 5-to-1 — by Trump fans.

Bill Davis, owner of the seafood restaurant Barnicle Bill’s in Sarasota, was upset with Hillary’s description of Trump supporters as “a basket of deplorables.” So he decided to post a sign supporting the GOP nominee: 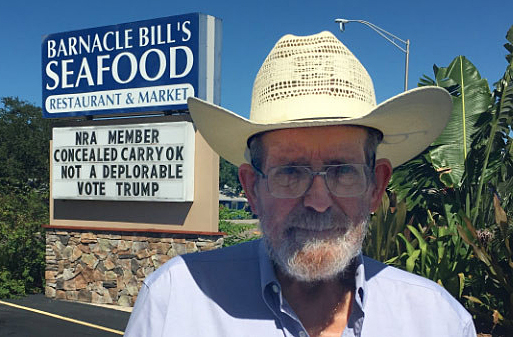 The first debate is tonight and my money is on Trump walking away with it. Clinton is terrible in a debate and the Trump persona will literally overshadow and dwarf the Hildabeast on stage. Trump is leading Clinton in Florida… shows of support like this must terrify Hillary and that is sure to be uppermost in her mind when she scales that stage tonight.

Clinton has outspent Trump 5 to 1 and is still losing. And although the polls still show her with a minor edge on winning the election, that is bound to change at this rate. The worm is turning and in the final stretch, Trump could leave her in the political dust of history. If Trump walks away in the debate tonight, Clinton will be all but finished. If she has a potty attack, a seizure, a brain freeze, a stroke or a fainting spell… well, Trump can start picking out drapes for the White House.

Trump’s followers have enthusiasm and passion for their candidate. Hillary can’t even get a soul to show up to go door to door for her. Her crowds have been underwhelming to say the least. Barring the rigging of the election, it looks like Donald Trump will be the next president of the United States.