Now, to be fair to Bill Clinton[1], he was probably ogling ALL of the Trump women, not just Ivanka. He did indeed look like a guy eyeing a banquet table who just couldn’t get his fill. Unfortunately for him, Hillary caught him savoring the competition and didn’t like it one bit. Even worse, it was all caught on video and went uber viral. What’s a lecherous ex-president to do?

Hillary looked old and haggard when she first got there today. She perked up a bit later… that was until Bill’s eyes started roving as they always do. They are not even trying to hide it now. I guess you never grow out of bad habits like theirs. I just thank all that is holy that the Hildabeast was not elected. Can you imagine the hot and cold running bimbos at the White House? If I were Trump, I would sanitize that whole damn place. 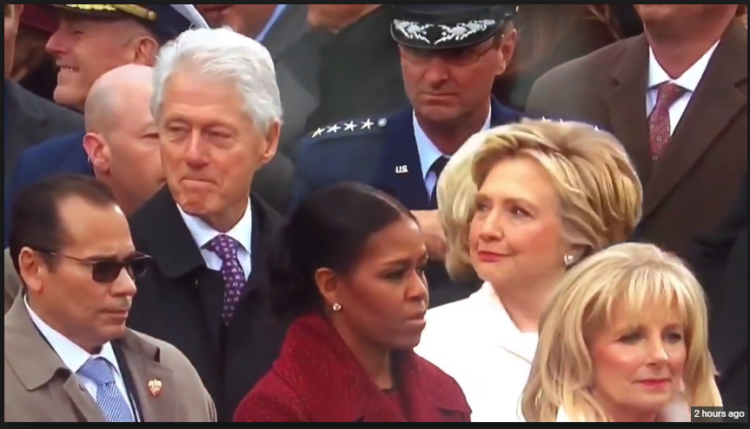 Ivanka Trump looked elegant and classy today. The nation noticed, and so did Bill Clinton!

Unfortunately, for Bill, Hillary also noticed him checking Ivanka out, and it did not go over very well to say the least…

Hillary was already having a bad day, but after this, I would have to imagine it is one of the worst days of her life.

When she arrived at the inauguration, you could see that she was burning up inside.

This was supposed to be her day, but there walked Trump, making that famous walk with the outgoing president.

Then, she had to watch her sick, disgusting, pervert husband eyeballing the First Daughter, Ivanka, like she was a turkey on Thanksgiving Day.

Given, Ivanka Trump is a stunning woman. And Melania Trump today gave Jackie Kennedy a real run for her money. Beauty is not something the White House will lack for at least the next four years. In fact, it is a welcome change. Seriously. If I had to look at one more atrocious outfit on Michelle Obama, I don’t think I could take it. At least we have taste, grace and beauty back in the People’s House.

I just keep flashing back to Bill Clinton ogling Kelly Clarkson’s backside. The man simply has no shame whatsoever. He’s a brazen womanizer and pervert. If looks could kill… that prolonged look that Hillary gave Bill would put him six feet under. Hell hath no fury like a failed candidate scorned.