Looks like Susan Sarandon[1] and Hillary Clinton are no longer BFFs. Sarandon went on Stephen Colbert’ show and trashed Hillary while coming out as a Bernie Sanders acolyte. It’s not surprising though… no one likes the Hildabeast. Not even a liberal hypocrite like Sarandon. She actually said she fears Hillary Clinton’s war record more than she fears Donald Trump’s plan to build a wall at the US-Mexico border. That was the worst insult she could think of[2] I guess. “Look how happy we were,” Sarandon joked, referring to the photo of her and Clinton. “Then I had to break up with her.” Sarandon said she told Clinton not to agree to go into Iraq because of what she said was a lack of evidence and exit strategy, but the then-New York senator voted anyway to authorize the invasion. “So I was like, ‘Who is this person? I can’t trust her,’” Sarandon said. And she’s not alone by a long shot, but for saner reasons. 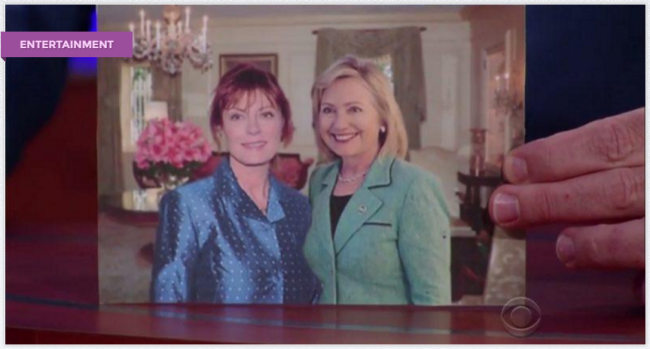 From Tell Me Now:

Hillary Clinton has a real problem with women. She is hemorrhaging support from the very base she should easily win.

Susan Sarandon is one of those women who has turned her back on Hillary – and she’s publicly calling out the former First Lady for her hypocrisy and lies! She told Stephen Colbert that she might not even vote for Hillary in the general election!

You have to check out this interview. It’s going to leave a mark on Hillary from one of her former cheerleaders!

Sarandon also cites fracking and the minimum wage as differences with Hillary. “Fracking is the absolute worst thing you can do for the environment,” Sarandon said, adding, “She goes behind my back, and she’s selling it all over the world.” Boy, Marxist much? This woman is a liberal moonbat extraordinaire. Sarandon made it clear she wouldn’t vote for Trump though. But she’d be right at home in his camp these days no doubt. If Sanders gets out of the race, many of his followers will go to Trump. That ought to speak volumes. Personally, I think that either Trump or Cruz would absolutely trout smack Hillary Clinton. I guess we’ll see.