That’s because CNN may have leaked the debate questions to Hillary Clinton[1] ahead of time. They don’t call it the Clinton News Network for nothing!

We’ve already seen videos of a CNN employee instructing a portion of the audience in exactly what to say, even though CNN presented the debate as though the audience was completely on their own and unrehearsed.

This is so deplorable that CNN’s own Jake Tapper responded and used the word “horrified”[2] almost too appropriately. 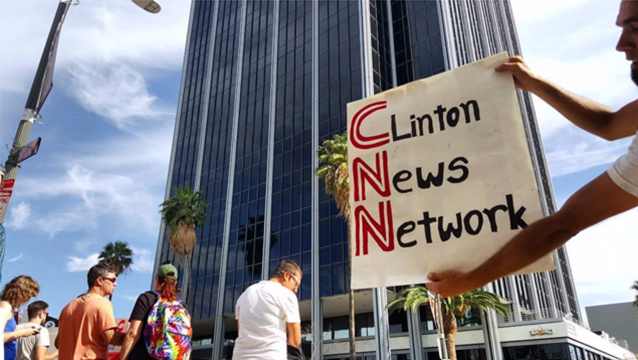 When WikiLeaks dumped the most recent batch of emails, a number of people were stung in their connection to the Clinton campaign.

Among them was former CNN commentator Donna Brazile, who is now serving as interim chair for the Democratic National Committee — a post that was, ironically, vacated by Debbie Wasserman Schultz after she was stung in a similar document dump just before the convention.

Brazile was revealed to be Clinton’s mole at CNN, feeding information about attacks from the Sanders campaign during the primary. But another email suggested that Brazile may have even facilitated the Clinton campaign’s access to questions ahead of televised town hall meetings.

As of now, there’s one Presidential debate left for Donald Trump and Hillary Clinton. Trump recently joked about making Clinton take a drug test, suggesting that she’s doping before the debates. It’s like he’s stating that there’s no way she could stand up on her own after all the videos where Hillary takes a tumble.

CNN denies any and all questions that suggest they have provided questions to the Clinton campaign[3] ahead of time.