You Won’t BELIEVE What Strange Thing Was On Stand-By At Hillary’s Rally! [VIDEO]

Okay, I was willing to give the benefit of the doubt[1] here when I first saw an ambulance in Hillary Clinton’s motorcade. I figured it was a coincidence and had been there for someone in the audience. I don’t believe that anymore and here is why. The Clinton campaign tried to shrug this off saying that every presidential motorcade has an ambulance. That is simply not true. I have never seen an ambulance tagging along in a presidential motorcade. It is bad optics and makes a leader look weak. If you will remember, when Reagan was shot, one of his men had to drive him to a hospital.

What gave me pause here was InfoWars. But Paul Watson is a good writer and a fairly reliable source there unlike some of the others. He says they had a reporter in Cleveland who saw the ambulance and a gurney being wheeled out. The EMS workers were in bullet proof vests. You can see it for yourself in the video below. The only rational explanation here is that it was a precaution for Hillary Clinton. We know she has something wrong with her and she won’t release her medical records. Anyone with eyes in their head can see she is not well. 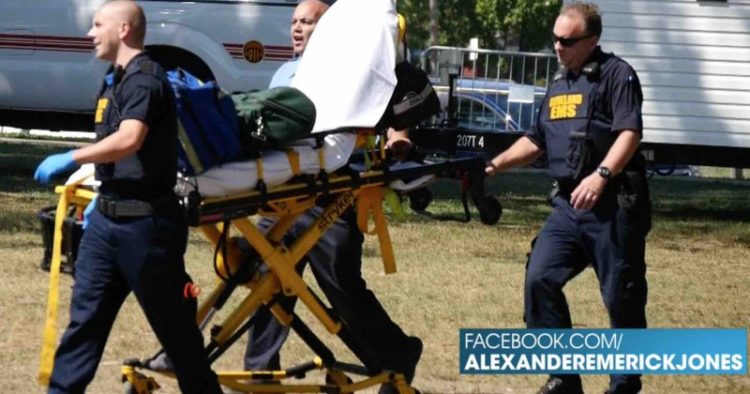 EMS workers wearing bullet proof vests who had been traveling in an ambulance that was part of Hillary Clinton’s motorcade in Cleveland, Ohio earlier this week were caught on camera wheeling out a hospital bed, prompting more questions as to the state of Hillary’s health.

Hillary suffered a four minute coughing fit during the event which prompted national headlines and an attempt by the Clinton campaign to pressure the media[3] into not reporting on future episodes of Hillary’s ill health.

Infowars reporter Millie Weaver reported how she was intrigued to see the EMS workers traveling with Hillary given all the questions about her health.

“I’m standing there waiting for Hillary to come out of her tent and the event was already running over an hour behind, so I had a feeling something was wrong, that maybe she was sick….and sure enough I turn right around and there is a gurney and there’s these EMS workers bit they are wearing what looks like bullet proof vests,” said Weaver.

The men seen in the video wheeling out the gurney emerged from the same ambulance that had been part of Hillary’s motorcade, according to Weaver and her cameraman. “They were staged right behind stage waiting in the event that maybe she might have had something happen or maybe she fainted or fell,” said Weaver, who noted how Clinton “sounded so sick in person” when she finally emerged from the tent to give her cough-addled speech.

If this isn’t an indication of Clinton’s health, please explain to me what it is and stop lying about the motorcade. Hillary suffered a four-minute coughing fit that she never fully recovered from in Cleveland. Media outlets have had to cut her feeds because of coughing fits. She looks haggard and frail to me. Now, she is threatening the media if they don’t shut up about her health. Yeah, that’ll work… it guarantees a media shark swarm to blood in the political waters.