NoisyRoom.net[1]
By: Terresa Monroe-Hamilton
Cross-Posted at Right Side News[2] 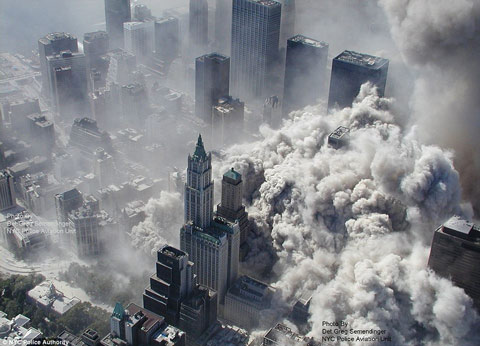 A scandal that spans three presidencies and more is coming to light[3]. In a non-defined conflict against terrorism, we have lost over 6,750 U.S. service members who have died[4] in Operation Iraqi Freedom and Operation Enduring Freedom. American blood spilled in wars that do not attack those who attacked us on 9-11. To put this in perspective, fewer died in Pearl Harbor and we nuked the Japanese. We were told after 9-11, that it was al Qaeda, with no other state sponsors. If the allegations prove accurate, 9-11 was nothing less than an act of war by Saudi Arabia[5].

“It’s classified because if it were released, the people would demand war against Saudi Arabia, and the entire US policy of having the Sunni Arabs price their oil in US dollars in exchange for supporting their dictatorships would fall apart.”
— Comment left at Hot Air (Hat Tip: The Radio Patriot[6])

According to the New York Post, Democratic Rep. Stephen Lynch and Republican Rep. Walter Jones have come forward with solid accusations claiming that 28 pages from the 2002 report on 9-11, were not only redacted, they were blank except for an on-going ellipsis. The 28 pages were purportedly removed by President Bush when the report was released, but are now leaking out 12 years later[7]:

President Bush inexplicably censored 28 full pages of the 800-page report. Text isn’t just blacked-out here and there in this critical-yet-missing middle section. The pages are completely blank, except for dotted lines where an estimated 7,200 words once stood (this story by comparison is about 1,000 words).

A pair of lawmakers who recently read the redacted portion say they are “absolutely shocked” at the level of foreign state involvement in the attacks.

Reps. Walter Jones (R-NC) and Stephen Lynch (D-Mass.) can’t reveal the nation identified by it without violating federal law. So they’ve proposed Congress pass a resolution asking President Obama to declassify the entire 2002 report, “Joint Inquiry Into Intelligence Community Activities Before and After the Terrorist Attacks of September 11, 2001.”

Some information already has leaked from the classified section, which is based on both CIA and FBI documents, and it points back to Saudi Arabia, a presumed ally.

The Saudis deny any role in 9/11, but the CIA in one memo reportedly found “incontrovertible evidence” that Saudi government officials – not just wealthy Saudi hardliners, but high-level diplomats and intelligence officers employed by the kingdom – helped the hijackers both financially and logistically. The intelligence files cited in the report directly implicate the Saudi embassy in Washington and consulate in Los Angeles in the attacks, making 9/11 not just an act of terrorism, but an act of war.

As Ed Morrissey of Hot Air[8] points out, the intel Sperry cites will eventually be discredited or the executive branch will be implicated in the interference with one or both reports.

Three Strikes And You Are Out

Buck Sexton[9] at TheBlaze last night said that he thought that the redaction was either to cover embarrassment for incompetency on the part of our intelligence agencies (the fact that no one was minding the store), or that our government was complicit in aiding and abetting the Saudis. Here are some facts for you:

1. Clinton and his intelligence agencies knew full well what bin Laden intended. Bin Laden stated it in 1998 and carried it out in 2001. I see no way that our agencies didn’t know it was a grave possibility.

2. Bush put the Saudis on a plane right after 9-11 and sent them home. No questions asked, right after the murder of 3,000 Americans and the largest terrorist attack on US soil ever.

3. At least one Saudi was involved in the Boston bombing. He was hurt and hospitalized. Michelle Obama visited him in the hospital. He was given safe passage back to Saudi Arabia and he visited the White House afterwards.

Three strikes and you are out.

I believed in President Bush when 9-11 happened. He seemed a hero for his actions right after the attack. Now those actions are clouded[10] and it would seem that those branded conspiracy nuts on both sides of the aisle, were in part right. I still don’t buy the wackier conspiracy theories that you will find out there and I will never be a Truther. But, I have for a long time pointed out the involvement of Saudi Arabia and Iran as well in the attacks. Now there seems to be strong evidence against Saudi Arabia who has denied their involvement since the beginning. Denials that were suspect to begin with since 15 of the 19 bombers were from Saudi Arabia.

The New York Post has laid out the now expanding evidence that Saudi agents, officials and operatives in several states, including Virginia, Florida, California and DC, gave funding and/or intelligence to the hijackers in 2001. If true, explain to me how that is not an act of war?

Karl Denninger[11] put it better than I can and got right to the heart of the matter:

It’s obvious given what happened, the logistical and funding requirements and where the hijackers came from along with inexplicable actions immediately following the attacks — unless our government explicitly let certain people flee.

Yet we went to war in Iraq and Afghanistan while helping the Saudis – the very people who attacked us.

And Obama, to this day, kisses the Saudi King.

It makes a very convincing case that the Saudi Government was involved in an act of war against the United States. Not simply terrorism – remember, the Pentagon, a military target, was one of the locations hit. The other intended target for the plane that went down in PA was the Capitol.

You awake yet America?

You damn well should be.

It’s about damn time that the mainstream media started talking about this – you’re only a decade late, *******s. And no, people like myself who have been saying this all along are not nuts.

And American blood flows, while we protect those who kill us. Sheer insanity. Obama literally bows to the Saudi King and it would appear that Bush and Clinton did as well. I can’t get the image out of my head of Bush holding hands with the King of Saudi Arabia. That blood is as black as oil. No one has ever solved or revealed who made the killing in the stock market by shorting airline stocks during all this. That needs to be answered.

Eight Trillion has been spent on security since 9-11 and we are less secure now than we were then. Does anyone really believe this is not on purpose? Incompetency only goes so far; evil intent is forever. We have been lied to over and over and over again. We see it going on every day and feel helpless to stop it. We must put a stop to this. These elite Progressives are getting wealthy off the deaths of our people and are redistributing every last dime America has. By design, they are bringing us to our knees and forcing us into a dictatorship. They have no reverence for the Constitution, for our laws or our branches of government. Do you trust our government anymore? I don’t – not on either side of the political spectrum.

Inside The Saudi 9/11 Coverup

Read the New York Post’s investigative piece in its entirety: Inside the Saudi 9/11 coverup[12]. I would very much like to know what is in those 28 pages. I want to know if this is another contrived attempt to smear Bush and Republicans, or if they were complicit in aiding the Saudis. I want the truth[13]:

Democrat Bob Graham, the former Florida senator who chaired the Joint Inquiry, has asked the FBI for the Sarasota case files, but can’t get a single, even heavily redacted, page released. He says it’s a “coverup.”

Is the federal government protecting the Saudis? Case agents tell me they were repeatedly called off pursuing 9/11 leads back to the Saudi Embassy, which had curious sway over White House and FBI responses to the attacks.

Just days after Bush met with the Saudi ambassador in the White House, the FBI evacuated from the United States dozens of Saudi officials, as well as Osama bin Laden family members. Bandar made the request for escorts directly to FBI headquarters on Sept. 13, 2001 – just hours after he met with the president. The two old family friends shared cigars on the Truman Balcony while discussing the attacks.

Bill Doyle, who lost his son in the World Trade Center attacks and heads the Coalition of 9/11 Families, calls the suppression of Saudi evidence a “coverup beyond belief.” Last week, he sent out an e-mail to relatives urging them to phone their representatives in Congress to support the resolution and read for themselves the censored 28 pages.

Astonishing as that sounds, few lawmakers in fact have bothered to read the classified section of arguably the most important investigation in US history.

Granted, it’s not easy to do. It took a monthlong letter-writing campaign by Jones and Lynch to convince the House intelligence panel to give them access to the material.

But it’s critical they take the time to read it and pressure the White House to let all Americans read it. This isn’t water under the bridge. The information is still relevant :­today. Pursuing leads further, getting to the bottom of the foreign support, could help head off another 9/11.

As the frustrated Joint Inquiry authors warned, in an overlooked addendum to their heavily redacted 2002 report, “State-sponsored terrorism substantially increases the likelihood of successful and more :­lethal attacks within the United States.”

Their findings must be released, even if they forever change US-Saudi relations. If an oil-rich foreign power was capable of orchestrating simultaneous bulls-eye hits on our centers of commerce and defense a dozen years ago, it may be able to pull off similarly devastating attacks today.

Members of Congress reluctant to read the full report ought to remember that the 9/11 assault missed its fourth target: them.

If any of this is true, America will never be the same. Our leaders should be forewarned that the public will not be pleased – the woodshed will have a long line on this one and tar and feathers will be handed out judiciously. We always knew that Saudi Arabia was involved, but this takes it to a new level. When a country’s government sanctions and helps with a terrorist attack of another country, ally or not, it is an act of war. Thanks to Obama, we are too weak after gutting our military to go to war. But if Saudi Arabia’s government was involved, then America needs to clean out our government now, beef up our military and go on a road trip to the land of oil and do a smack down of epic proportions.

The enemies within and without seem to have been shrouding an act of war[14] and Americans need to wrest control of our Republic back into the hands of patriots. As Judson Phillips says, we should remember there are certain crimes that have no statute of limitations.