I really need to stop asking the question, “Can they get any more ridiculous?,” because apparently some of them are taking that as a challenge. I don’t know what the winner of said challenge gets, but apparently it’s something worth making yourself look like the world’s biggest ass, because they absolutely do not hesitate. 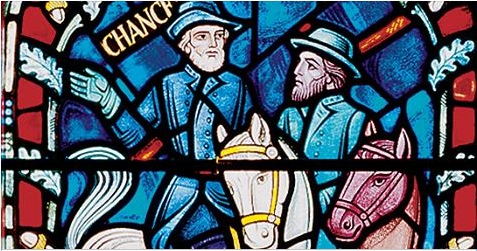 The beautiful windows show Stonewall Jackson and Robert E. Lee and apparently that was too offensive for… someone on the Internet somewhere who demanded that it be removed lest the Cathedral suffer the wrath of Tumblr and emotionally unstable social justice warriors who need something to complain about or else they will literally die.

Unfortunately, this was the result of a two-year long debate in which it was decided that the stained glass was a “barrier to our important work on racial justice and racial reconciliation.” That’s right, painted pieces of heated sand are too much for people who see racism in the weather.

“Whatever their origins, we recognize that these windows are more than benign historical markers,” they said in a statement. “For many of God’s children, they are an obstacle to worship in a sacred space; for some, these and other Confederate memorials serve as lampposts along a path that leads back to racial subjugation and oppression.”

Of course this decision comes on the heels of a multiyear debate about whether confederate history should be completely erased because it offends some people. Do confederate heroes have the right to be remembered or do the feelings of people who never actually cared about the monuments until they realized it could get them TV time matter more?

Of course, the guy who was formerly in charge of this Cathedral, Gary Hall, is a progressive nutball who appears to bend over backward to appease the left. He allowed Muslims to hold an event there on the 100th year celebration of the last caliph declaring war on the non-believers. (That would by you, me and Mr. Hall.)

He also held an anti-gun vigil on the anniversary of the Sandy Hook shooting, declaring that the “gun lobby is no match for the cross lobby.” In that same vein, he headed up the “Gun Violence Prevention Sabbath Weekend” which was nothing more than a call for gun control.

It is for these reasons that we shouldn’t be surprised that this Cathedral caved in to SJWs who cry like babies when they don’t get their way. It doesn’t make it any less of a shame, though.