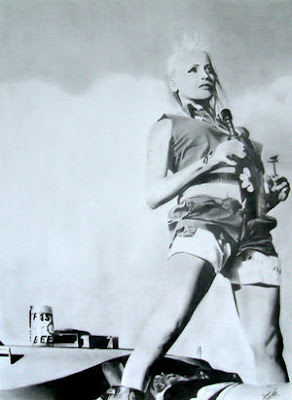 [1]
At dawn on September 1st, Luftwaffe struck at Polish airfields[2] destroying most of the planes before they could get off the ground. With control of the skies assured wicked Wehrmacht began the systematic destruction of railroads and the few communications nodes. From the very outset the Poles mobilization plan was seriously compromised. Before the day ended, chaos reigned at Polish Army HQ.[3]

The first phase of the campaign, fought on the frontiers was over by September 5th and the morning of the 7th found reconnaissance elements of Army Group South’s 10th Army just 36 miles southwest of Warsaw. Meanwhile, also on September 5th, vBock’s[4] Army Group North had cut across the corridor and turned southeast for Warsaw. Units of the 3rd Army reached the banks of the River Narew on September 7th, just 25 miles north of Warsaw. The fast moving armored panzer ‘Schwerpunkts’[5] of blitzing attacks left the immobile Polish armies cut up, surrounded and out of supply.

Meanwhile the closing of the inner ring at Warsaw witnessed some tough fighting as the Polish Poznan Army, bypassed in the first week of the war, charged heading and attacked toward Warsaw to the southeast. The German 8th and 10th Armies were put to the test as they were forced to turn some divisions completely around to meet the desperate Polish assault. In the end the gallant attack fell short and by September 19th the Poznan Army surrendered some 100,000 men and Poland’s last intact army.
As this was occurring the second, deeper envelopment led by General Heinz Guderian’s panzers [6]took the city of Brest-Litovsk on September 17th, and continued past the city where they made contact with the 10th Army spearhead at Wlodowa 30 miles to the south.

The war, for all practical purposes was over by September 17th. Lvov surrender on the 19th. Warsaw held out until September 27th and the last organized resistance ended October 6th with the surrender of 17,000 Polish soldiers at Kock.

The campaign had lasted less than two months and ended in the destruction of the Polish Army [7]and the fourth partition of Poland. German losses were surprisingly heavy considering the brevity of the campaign.

German casualties total some 48,000 of which 16,000 were killed. Fully one quarter of the panzers the German committed to battle were lost to Polish anti-panzer guns. The Luftwaffe was forced to write off some 550 aircraft.

It was not a cheap victory by any means [8]but it did confirm to the generals of the Wehrmacht that the military machine that they had built was indeed the best in the world and worthy of their confidence.

France – mobilized her military and demanded Deutschland withdraw from Poland.

Great Britain – mobilized her army and RAF (the Navy was mobilized the day before) and demanded Germany withdraw from Poland.

Russia – warned concern for civilian population of Russian descent and fear of Polish bandits would warrant armed intervention. She also mobilized her military.

Great Satan – Demanded a halt of indescriminate bombing of towns and civilians.

Poland – appealed to Great Britain and France to intervene in honour of the Mutual Assistance Treaty of 1939.

1 September is the day [9]an old world order was violently overturned, chock full of lessons, promises and harbingers that echo still today.